Here's a little secret, it's pretty common for anything announced at CES to have at least one twin. You've probably already seen the new touchless video doorbell by Alarm.com, but it's not alone in keeping grubby hands off your home. Arlo is also getting in on the game with its own no-touch model.

The Arlo Touchless Video Doorbell combines elements that are already common to most smart security cameras these days. Proximity sensors are used to detect a person approaching the door and trigger an audible chime and light up the doorbell to signal that the homeowner has been told somebody is at the door.

Homeowners will have all of the features they would expect from Arlo's current lineup of video doorbells like HD video with 180-degree viewing angle, two-way speaker and pre-recorded messages, and video recording. The model announced at CES 2021 is hardwired for power, but uses Wi-Fi for communication. Nothing has been said about a battery-powered model. 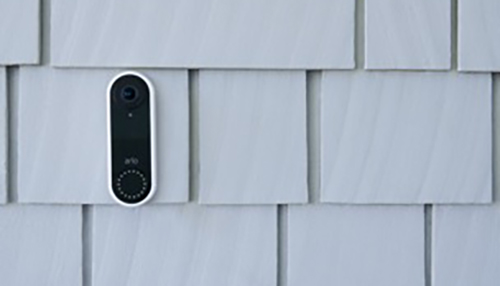 Arlo was named a CES 2021 Innovation Award honoree for this and its new indoor camera. Arlo hasn't shared pricing or other specifics yet, and the only photo looks exactly like (and may be) Arlo's current video doorbell. There also aren't any video demonstrations, which likely means this is more of a concept announcement than finished product. But even if this means the touchless model was only recently conceived of, it's so similar to existing Arlo doorbells and cameras that it shouldn't take long to build and put on the market.

Unlike the model announced by Alarm.com, Arlo's model doesn't mention anything about requiring installation by a professional.