Google killed Play Music in October 2020, a service many people loved for one feature in particular: its online music file locker with uploaded songs that seamlessly integrated with Play Music's streaming catalog. You could also just add titles you own and listen to them without ever having to pay a dime. Luckily, there are a few alternatives that replicate some of Play Music's capabilities, including its successor YouTube Music.

The first category is a collection of services that replicate Play Music's feature set almost 1:1 — you can upload your files to these platforms and listen to them via the respective apps, just as though you would stream music regularly. However, these services have slightly different approaches than Play Music, so here's what you need to watch out for.

If you don't mind the YouTube Music interface, it's the most straightforward solution you could hope for. You don't need to create a new account, you can just keep using your Google login. For a limited time, you could even directly move your files from Play Music to the newer platform. Once you've uploaded your files to YouTube Music, you'll find that there are some significant differences when it comes to library management and adding new songs, though.

YouTube Music strictly separates uploaded music from music available on the streaming platform. When you search for your uploaded songs, you always have to switch from the YT Music tab to the Uploads section, a separation that also divides the library when you manually scroll through your songs. When you sort your library by artist and want to see someone's albums, you're out of luck: You can only see an overview of all songs when you go this route.

You also lose the dedicated desktop uploading tool that Play Music had. When you want to add new files to YouTube Music, you have to drag and drop it on the service's website or rely on an unofficial third-party service.

YouTube Music is $10 a month if you want to access the streaming service portion of the service without ads, but the online locker is free and doesn't have ads if you only want access to your own files.

We explored the differences between Play Music and YouTube Music uploads in great detail in this article.

If you can't stand YouTube Music at all, you might want to give Apple Music a try. It allows you to upload 100,000 songs just like YouTube Music using iTunes on your computer. And much like Google's new service, your uploaded library is separated from the music available on the service itself when you search, so that's a limitation you'll have to live with.

To access your music on an Android device, you'll have to pay $10 a month for Apple Music, but the digital locker portion of the service called iTunes Match is also available standalone for $25 a year if you only use Apple products.

iBroadcast may not have the prettiest interface, but if you only want access to your uploaded songs wherever you are, it might be the best solution. The free service lets you store an unlimited amount of files, comes with Android and iOS apps on top of the web app, supports Chromecast, and has some intelligent Spotify-like playlists. The privately funded Seattle company behind it promises that it doesn't sell your data (we'll have to take its word on that) and is currently working on a $3.99/month premium service with extra features to stay afloat in the long term.

iBroadcast even has desktop and Android apps that monitor your folders for new music. If your files don't come with the correct metadata, you can adjust it after the fact — a Play Music feature YouTube Music never got. There's also Chromecast support. 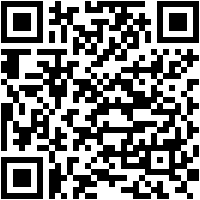 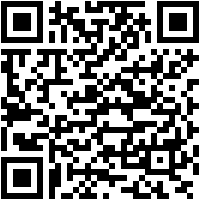 Media Leap is a recently launched Canadian service that allows you to upload up to 1TB of your own songs on its servers for free. It then lets you stream that music to up to five devices via a web interface and mobile apps, and you can download songs to your phone for offline listening. In contrast to the other services presented here, Media Leap still feels pretty rough around the edges when it comes to the interface, but streaming itself worked without issues for me. Be aware that a lot of features you usually take for granted are only slated for later, as a spokesperson told us. The team is working on a proper queue, Chromecast support, an equalizer, additional file formats such as m4a and aac (only mp3, ogg, and flac are supported right now), one-click album and artist downloads, mass metadata editing, duplicate song checking, and a light mode.

When you sign up, the service will ask you to add your home address and phone number, but you don't have to fill out these details — you just need to enter your name, email, and password and continue setup. If you need more than 1TB of storage, you can sign up for a $5 monthly plan — that's when you do need to enter more of your personal data. In the future, the company will "most likely" add ads for free users, so you might have to pay the subscription fee in the long term if you want to avoid that. 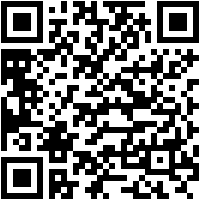 Deezer isn't our go-to solution as it only lets you upload a maximum of 2,000 MP3 files. That limit means it's only suitable for people who want to augment the service's catalog with a select few titles. Like in YouTube Music, your own files are hidden away and aren't seamlessly integrated with Deezer's library. They only show up in an extra section in the desktop app, hidden away under Favorites in the sidebar -> More -> My MP3s (which is also where you upload files). In the Android app, you'll only find your uploaded titles under Favorites in the bottom bar -> Playlists -> My MP3s. Deezer can be set as the default audio provider on Google Home and Nest devices, the only service in this list to support it other than YouTube Music — which is our main reason for including it in this roundup.

You need to pay for the $10/month premium subscription to access the online locker, which will also give you access to millions of songs without ad interruptions.

Some people might not be comfortable with uploading their music to an unknown online location and might just want a better experience when they listen to music added to their existing cloud services like Dropbox, Google Drive, OneDrive, Box, or their own server. That's where the following services come in.

Astiga is a web service that offers a convenient interface for listening to music you've saved to your cloud storage. It'll automatically organize your titles into a streaming service-like fashion once you've synced your library.

The basic functionality is free, but if you often add music to your cloud library, you might want to pay for the $4/month or $24/year premium subscription. It allows you to sync automatically or as often as you want to instead of only once all three days. Astiga is officially available on Android and the web, but there are third-party and experimental apps for other platforms. You can read more about it and sign up here. 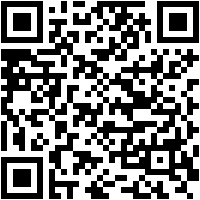 Like Astiga, CloudBeats is an app that connects to a cloud storage service or your own server and lets you stream your music files to your phone. The basic functionality is free, but if you want to download files to your phone through the app or send music to a Chromecast target, you need to pay a one-time fee of $6.99.

In contrast to the other options listed here, CloudBeats is only available on Android and iOS. You'll need to use another player on your desktop to listen to your songs there, so you might run into roadblocks when you want to sync playlists. 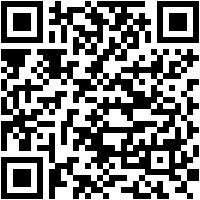 CloudPlayer's approach is almost identical to CloudBeats'. The Android app connects to your OneDrive, Dropbox, and/or Google Drive storage and organizes recognized audio files in a library. You can comb through the library by album, artist, playlists, genres, songs, or playlists. You also get access to online radios. If you don't like the default light theme, you can change it, and there are quite a few more options in settings if you don't like some design decisions or the default playback behavior.

A $7.99 in-app purchase gives you more features like a 10-band equalizer, loudness normalization, gapless playback, Chromecast and AirPlay support, and an ad-free radio experience. There's no iOS app — the CloudPlayer Android app is the only way to go. Muzecast is another solution when you want to access your own files in the cloud, and it's very much similar to the others listed here. You can stream content from your computer, Dropbox, or OneDrive. The player supports the usual DRM-free file types. Lossless streaming of up to 24/192 KHz is available, songs are cached on your Android device, it has a built-in equalizer, and playlists can be synchronized across Android phones and even other apps that support M3U and WPL. Muzecast is also available on Android Auto, Wear OS, and Android TV. It works with Chromecast. 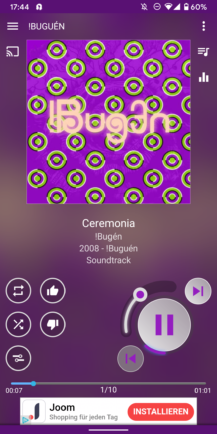 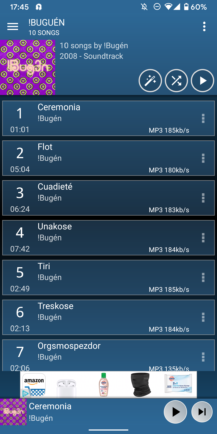 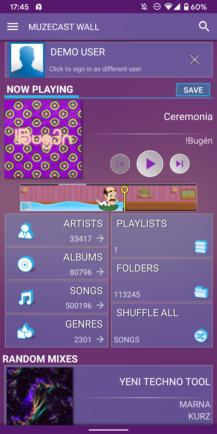 I personally dislike the design, but some people might enjoy its out-of-the-box retro look. There's a free, ad-supported version of Muzecast and a $7.99 ad-free variant. The Android TV app costs $4.77. 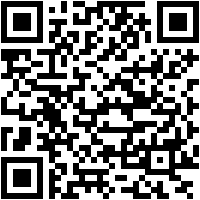 Here are a few solutions that only work with servers or computers situated in your home or your webspace.

You've probably already heard of the home entertainment manager Plex that organizes media stored on your computer or server — cloud services aren't supported (anymore). It wants to be a one-stop solution for all of your media files like music, films, TV shows, pictures, and so on. It offers beautiful clients for almost all of your devices. 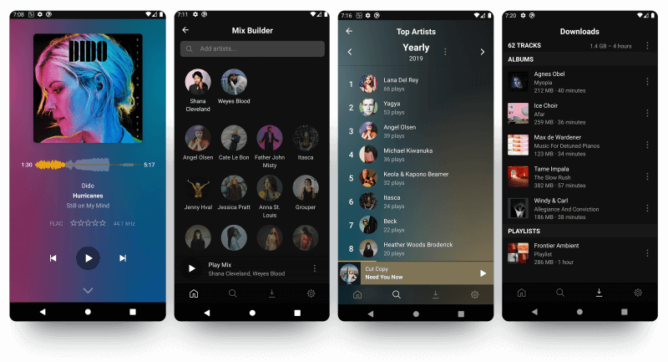 Plex recently launched a standalone music player called Plexamp. It's among the prettier solutions with a design that takes cues from Soundcloud and Spotify, written in responsive and modern React Native code. You need to pay $5 a month to use it, but you can also test the regular free Plex app before committing. Jellyfin is a completely free and open-source alternative to Plex, built on the now proprietary Emby media server. Its Android app isn't as pretty as Plexamp, but it absolutely doesn't have to hide its face, either. You can install the host software on your computer or a server, and once you've got everything indexed, you're ready to go. Jellyfin lets you download offline copies of your media when you're out and about, there's Chromecast support, an Android TV app, and, most recently, an Android Auto interface. 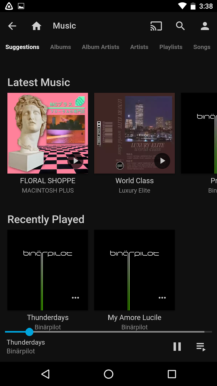 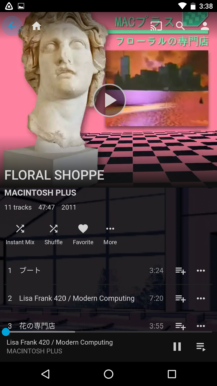 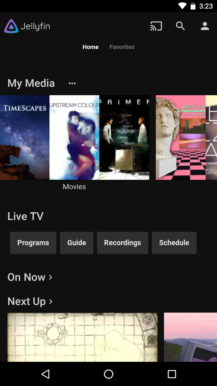 Jellyfin doesn't have native support for cloud storage services, but there are solutions if you really want to. To get started, you need to install the server application and the Android app. 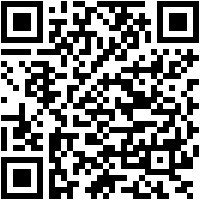 Personally, I don't think any of these services nails music storage as well as Play Music did — Google's service just had the best integration between your uploaded files and the streaming catalog. The solutions listed here are either only really good as streaming services or as storage solutions for music you already own. Unfortunately, there's no turning back now that Play Music is discontinued, so you'll have to settle for one of these. Of course, you can also manually move your music to your phone and use a player like Phonograph.

10 new and notable Android apps and live wallpapers from the last two weeks including ...