Earlier today, Apple cited instances of Parler being used to coordinate plans for this week's raid in Washington D.C, and told the service to overhaul its moderation policies or risk being removed from the App Store. Google has already banned the application, as the listing is no longer available on Google Play. Google provided the following statement to Android Police:

In order to protect user safety on Google Play, our longstanding policies require that apps displaying user-generated content have moderation policies and enforcement that removes egregious content like posts that incite violence. All developers agree to these terms and we have reminded Parler of this clear policy in recent months.

We’re aware of continued posting in the Parler app that seeks to incite ongoing violence in the U.S. We recognize that there can be reasonable debate about content policies and that it can be difficult for apps to immediately remove all violative content, but for us to distribute an app through Google Play, we do require that apps implement robust moderation for egregious content. In light of this ongoing and urgent public safety threat, we are suspending the app’s listings from the Play Store until it addresses these issues.

Google also confirmed that the takedown won't delete Parler from phones with it already installed, and the site will continue to function in Chrome with full functionality (however, the site seems to be having issues right now). A cached copy of Parler's Play Store listing said it passed 5 million installs during its time on the store. Parler was removed from our sister site APKMirror earlier today.

Parler was first released in 2018, and quickly caught on as a popular platform for right-wing activists and politicians, especially those banned by Twitter and Facebook. It surged in popularity following November's U.S. presidential election, partially in response to the increased fact-checking by Twitter and Facebook on posts from Donald Trump and other high-ranking Republicans.

One day after Google removed Parler from the Play Store, Apple has followed suit and removed the app from the iOS App Store. Apple provided the following statement to TechCrunch and other news outlets:

We have always supported diverse points of view being represented on the App Store, but there is no place on our platform for threats of violence and illegal activity. Parler has not taken adequate measures to address the proliferation of these threats to people’s safety. We have suspended Parler from the App Store until they resolve these issues.

However, Parler now has more serious issues than having its native applications removed. Amazon Web Services (AWS) is suspending Parler's web hosting, effective on Sunday, which will prevent the network from functioning at all. Amazon hasn't released an official statement on the matter, like Apple and Google have, but BuzzFeed News obtained an email sent to Parler from AWS:

AWS provides technology and services to customers across the political spectrum, and we continue to respect Parler’s right to determine for itself what content it will allow on its site. However, we cannot provide services to a customer that is unable to effectively identify and remove content that encourages or incites violence against others. Because Parler cannot comply with our terms of service and poses a very real risk to public safety, we plan to suspend Parler’s account effective Sunday, January 10th, at 11:59PM PST. We will ensure that all of your data is preserved for you to migrate to your own servers, and will work with you as best as we can to help your migration.

The message also contained the below screenshots of content posted to Parler, as examples of posts violating Amazon's terms of service against violence [TW: violence, racism]. 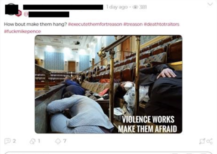 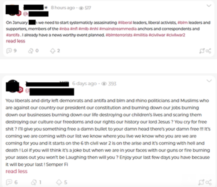