Asus has a mixed history with software support, but more often than not, the company slips behind on keeping its phones updated. The original ROG Phone was released in late 2018 with Android 8.1, a few months before Android 9 Pie became available, and finally received Pie a year later. Now it seems the gaming flagship will stay on the outdated OS.

One ROG Phone owner posted on Asus' Chinese ZenTalk forum a few days ago, asking when the device would be updated from its current Android version of 9.0 Pie. In response, an Asus representative confirmed the ROG Phone would never receive an Android 10 update (or presumably, anything newer). 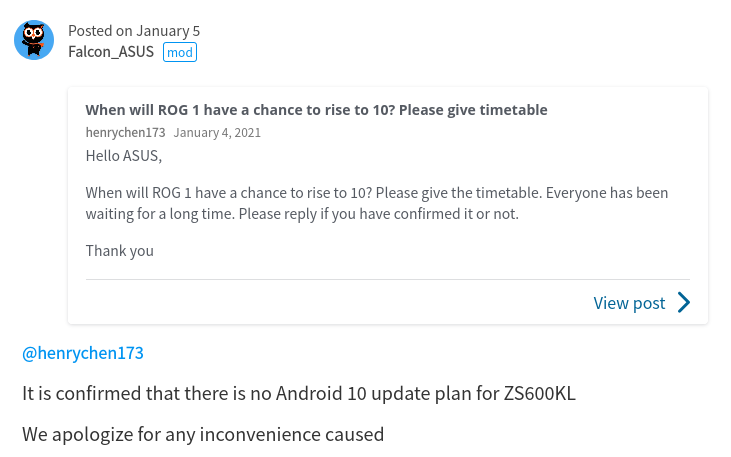 It's embarrassing for Asus to cut off updates for the original ROG Phone, especially considering the device is barely more than two years old, and the only major update it received came almost a year after Google released it. Not only that, but the ROG Phone was priced at $900-1,100 when it was released in the United States.

It's not clear yet what Asus' update plans are for the rest of the ROG series. The ROG Phone 2 shipped with Android Pie when it was released in 2019, and was updated to Android 10 in March. The device currently has a rating of 0.5/10 in our security update tracker, with the longest average delay between updates (44 days) of any flagship phone we've looked at. The ROG Phone 3 was released last year with Android 10, and neither it nor the ROG 2 have received Android 11 yet.

Archos made a rugged 5G phone with a monstrous 8,000mAh battery