The last time we wrote about Samsung Health, it was because the app was actually losing a few features. That's not the case today, as Samsung has announced an expansion of the app's Challenge mode in the form of a new Group Challenge that lets you share fitness stats and compete against a group of friends.

Previously, 1-on-1 "competitions" like this were possible, but now Samsung is opening it up to groups of 10 people. Galaxy users will be able to create a challenge in the Together section of the Health app to see who can take the most steps in a set amount of time, or who can be the first to reach a step goal. Once you create a challenge, you can invite up to 9 other participants — even if they don't currently use the Samsung Health app. 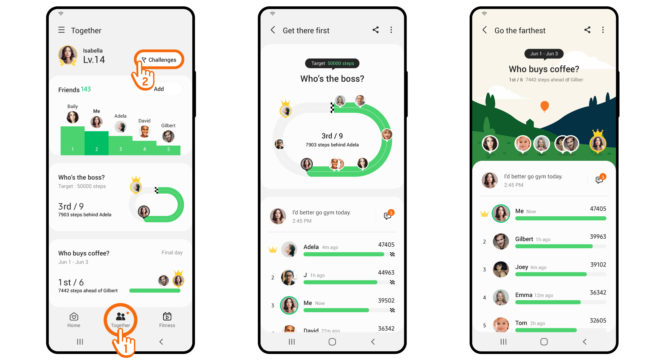 Here's what the feature will look like once it rolls out.

Bringing friendly competition into fitness apps can be a good way to motivate people to work out more. Samsung says participants in challenges take an average of 22% more steps than people who just use it by themselves.

The new Group Challenge feature will begin rolling out to devices via an app update starting on January 12. Once the official release begins, you'll be able to download the Samsung Health app from APK Mirror, Google Play, and the Galaxy App Store.