The predictable deluge of leaks and rumors has already given us more than just a sneak peek at the Galaxy S21 line ahead of its formal unveiling, but it's not done yet. In the latest leak, an Galaxy S21+ poses for the camera, showing off its purple and gold back and the sought-after flat display with minimal bezels. Plus, a separate leak gives us an early look at some of the first-party cases for the S21 lineup. 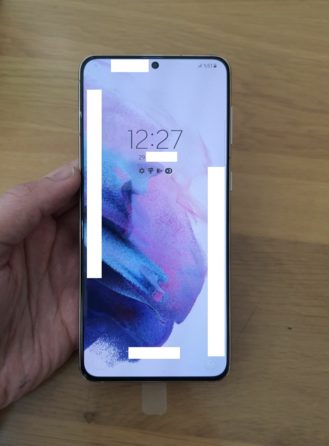 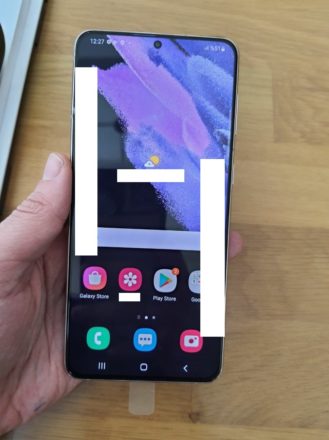 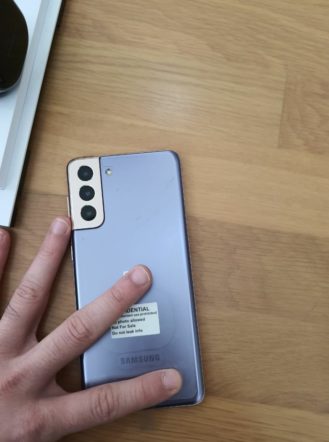 Ironically, the label on the back reads ‘No photos allowed,’ and ‘Do not leak info.’

The Galaxy S21+ has a flat screen with almost symmetrical surrounding bezels in these hands-on photos. Some of the device and location identifiers have been masked, but the images have still got plenty of good stuff to look at. Turning the phone over, you’ll see the eccentric camera bump that older leaks have eagerly pointed out. However, while surely unusual, the gold on purple colorway doesn’t look as appealing in live photos as it did in early renders, to my eyes at least. Moving on to another leak, MySmartPrice shows us what Samsung’s own range of cases for the Galaxy S21 series is going to look like. Here we have multiple kinds of flip covers — some with an LED view and others without, some with built-in kickstands, clear view cases with lanyard hooks, along with a handful of premium options in leather and fabric finishes.

On closer inspection, you’ll notice that some of the cases are unable to flatten out the camera bump completely, leaving a slightly raised area. In addition to these covers, you can also expect Samsung to sell S Pen + silicone case bundles for the S21 Ultra, which is said to add stylus support, though without having a Galaxy Note-like slot to house it. We may have to wait until the announcement day in mid-January to see the S Pen peripheral.

OxygenOS 11.0.6.7 for OnePlus 8T introduces more bugs than it fixes