It's been a big year for YouTube Music. The platform picked up plenty of new features and became Google's sole music streaming service when Google Play Music started shutting down a few months back. Now a couple more tweaks have been spotted in testing, including one that switches an artist's album view section from a list to a grid layout.

The updated album view appears to apply to the album section of artist pages. Previously, a long list of text appeared with tiny album-art thumbnails. With this new tweak, an artist's albums display side-by-side in rows of 7 on the web, or a  2x2 grid on the mobile app. 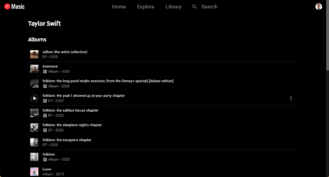 While switching from a list view to a grid layout may not sound like the most exciting of developments, it does make a significant difference in day-to-day use. Not only does it maximize the space by displaying more albums at once, but it also makes them more glanceable and easier to find thanks to the large, recognizable thumbnails of album artwork. Of course, the list view does have some advantages too, like making longer titles easier to read — it'd be great to be able to choose the viewing mode for ourselves.

Additionally, YouTube Music is now suggesting related playlists underneath custom mixes, giving users a way to browse similar collections put together by the YTM team and fellow users. This seems to be limited to the iOS app for now, though.

The updated grid layout appears to be in testing currently, which means it hasn't rolled out widely yet. I'm still seeing the list view on my end, but if/when the grid format does begin to have expanded availability, you'll be able to try it for yourself in the YouTube Music app (which can be downloaded from APK Mirror or the Play Store) and on the web.

The Chrome OS login screen is getting a Material Design tweak