The Galaxy S series has been around for over a decade, and in that time it's become one of the best-selling smartphone lines in Android history. Widely seen as the iPhone's fiercest rival, the hype surrounding each new version's release is immeasurable. That popularity always leads to plenty of leaks in the months leading up to release, and Samsung's next offering is no different. The next Galaxy is still a little way out, but thanks to our own Max Weinbach and others, we already know practically everything about the S21.

What phones are we getting?

Like there was this year with the S20, there will be three models of S21: the S21, S21+, and S21 Ultra. I was hoping to see an S21e next year for people who don't like massive phones, but sadly that doesn't seem to be happening. When Samsung skipped from S10 to S20, there was some uncertainty about how the naming convention would work moving forward. Would the next phone be an S21 or an S30? Well, as the title has already given away, Samsung is going with the former. 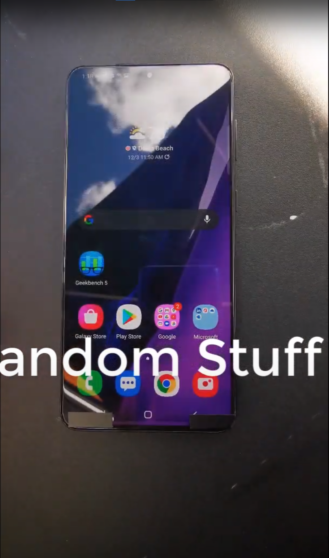 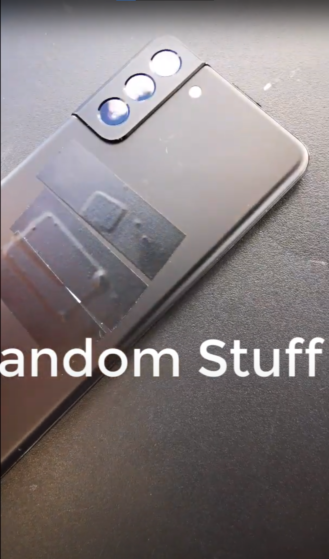 The renders we had before gave us a good look at the S21, but now we have hands-on images and official teasers. A YouTube user uploaded a first impressions video showcasing the S21+, and although the video has since been taken down, I was able to grab some screenshots. Unlike the S20, which had a slightly larger chin, the S21 looks to have bezels that are almost completely symmetrical.

The best news, in my opinion, concerns the back of the phone. Unlike the glossy S20 that loved collecting fingerprints, the S21 will come in a matte finish. 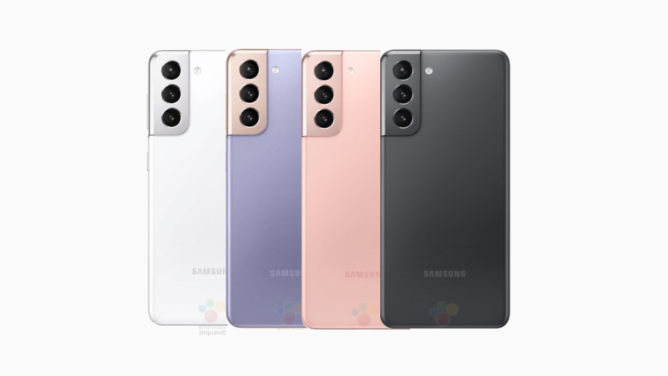 There are plenty of colors to choose from, but sadly those choices differ between the three sizes, just like the S20. The S21 will be available in Phantom Violet, Phantom Pink, Phantom Gray, and Phantom Black. The S21+ loses the pink and swaps the white for silver. Disappointingly, the S21 Ultra will only be available in Phantom Black or Phantom Silver. That means the most expensive phone has the fewest options for the second year running, which I think is a shame.

Like the Z Fold 2, which uses different colors for the hinge and body, the S21 will feature a two-tone frame and camera bump depending on which version you get. Phantom Black will be all black, while the violet and pink colorways will have copper bodies. Phantom White will reportedly have a gold-tinted frame while the back plastic/glass will be a similar color to the Note 7.

To me, the biggest design upgrade is the camera bump on the back. It's still comically large on the Ultra, but it looks more refined than the one found on the S20. The camera bump will be a part of the frame itself, wrapping around the top left corner and cutting into the back panel. It won't be to everyone's taste, but I like it.

The base S21 inherits a plastic back from the Note20, while the S21+ and Ultra will continue to be made with glass. 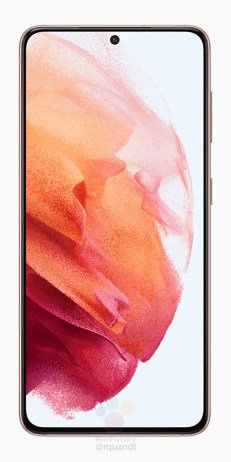 One UI 3.1, which will debut on the S21 series, brings Google Discover integration to the home screen. The lack of Google Discover has been my main issue with Samsung's launcher, so this is a welcome change. Speaking of home screens, several wallpapers from the upcoming device have leaked and can be downloaded here.

As Samsung's next flagship family, the S21 range is expected to be top of the line in every way. Here's what we've heard we can look forward to from this hardware:

Like this year, the S21 and S21+ feature almost identical specs, while the Ultra gets a few extra goodies that we'll talk about later. Both smaller phones have the same capabilities from their camera hardware as the S20 while getting a downgrade in the display department. All S20 models had QHD+ panels that could run at 120Hz — the caveat was that you had to choose between those two, with the higher refresh rate only available at the lower resolution. The S21 and S21+ use 1080p panels instead, removing that choice.

Display and battery sizes are almost identical to the S20 range, although the S21+ gets a small upgrade from 4,500mAh to 4,800mAh. All three will have the same chipset, likely either a Snapdragon 888 or Exynos 2100, depending on the region. Usually, this is where I would lament the fact I live in an Exynos country, as historically, Samsung's own chips are much worse than the Snapdragon counterparts. However, our inside source suggests that the 2100 will not only match the 888 but possibly beat it in some areas. We'll take that one with a grain of salt until we see it for ourselves.

Thanks to an FCC report we know that the US unlocked S21 will support mmWave 5G. The baby S20 didn't support this technology unless you purchased a version made for Verizon. The 6-9GHz support for Samsung's ultra-wideband technology seems to be missing from the base S21, but we'll see what we get from the other models

The first-generation ultrasonic fingerprint scanner featured on the S10 and S20 proved to be a little hit-or-miss for some users, but now a new, larger scanner is expected for the S21: likely the Qualcomm 3D Sonic Max. This 8x8mm sensor promises improved speed and accuracy, and even supports reading two fingerprints at once — but we don't know if Samsung will be making use of that.

Sadly, it seems that some markets won't be getting a charger in the box, much like the iPhone 12. Omitting something that most users already own has environmental benefits, but it's still a move that won't sit well.

What makes the Ultra ultra? 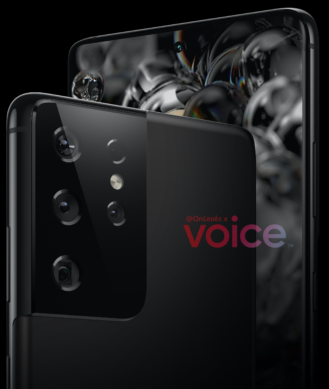 The S20 Ultra didn't really feel much different from the S20+; it was huge and had a couple extra camera gimmicks, but that was it. The S21 Ultra, on the other hand, has a few more cards up its sleeve. Like the S20 Ultra, it's the biggest in the range, although it's slightly smaller than its predecessor, with a display size of 6.8" vs. the 6.9" we have now. Despite this smaller size, it retains the same 5,000mAh battery. That battery, combined with the new chipset and other display upgrades, should lead to excellent battery life. The S21 Ultra benefits from the same adaptive refresh rate tech that we saw in the Note20 Ultra. On top of that, it can maintain 120Hz even at QHD, making this a big upgrade over the last model. Contrast has also been improved, as has the maximum brightness; my S20 can already burn holes in my corneas, so it'll be interesting to see just how bright this thing is.

The display panel also borrows some features from the Note line in the form of S-Pen support. For years now, rumors of the Galaxy S line gaining S-Pen support have circulated but never come to fruition. Next year, it's finally happening with the S21 Ultra. Unlike how Samsung sells the Note, the stylus won't be included in the S21's box, nor will the phone have a slot to hold it. Instead, Samsung will sell cases designed to keep the pen safe, and I'm sure case manufacturers will do the same. Personally, I'm okay with this compromise. The Note20 Ultra, despite being the same size as the S20 Ultra, had a smaller 4,500mAh battery. Keeping the pen in a case to retain the larger battery sounds just fine by me. Max has discovered that, as of a few weeks ago, Samsung has no plans for a Note21, focusing on Foldables instead. That doesn't mean the Note line is dead-dead, but it's sure not a good sign. 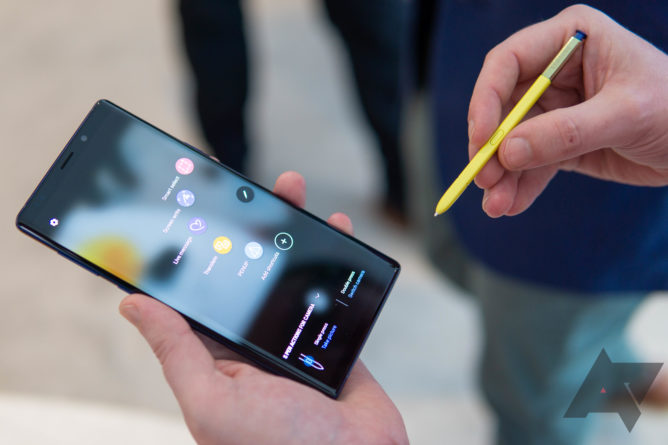 Is it finally time for the S Pen to spread beyond Note phones?

Finally, the new Ultra will once again pick up some new camera tricks. An upgraded 2nd-gen 108MP sensor will be present this time around, which means better light gathering. The ultrawide setup is the same as this year, coming in at 12MP. The zoom cameras are where we see the biggest change — that's right: cameras, plural. The S21 Ultra has a fixed 3X telephoto lens, plus a 10X periscopic lens. That means that the 100X Space Zoom feature is returning but shouldn't look as crappy as before. Both telephoto sensors are now 10MP and have 130% larger pixels and dual pixel autofocus. Add in the return of laser autofocus, and we should have a much better camera experience than last time. Hopefully, Samsung will improve its post-processing as well, but I'm not holding my breath.

How much will they cost?

Rumors suggested that the S21 range would be cheaper than this year's models, and that does seem to be the case. The leaked prices are:

The 5G S20 started at €999, so dropping down to €849 is quite the discount. The Ultra, meanwhile, is going up in price. The S20 Ultra started at €1,349, while the S21 Ultra could be €50 more. While I was hoping that the whole range would see a price cut, this isn't surprising. The S21 Ultra gets a brand new display, S-Pen support, and what should be a much-improved camera setup compared to its predecessor. Those upgrades will naturally come at a price.

When are they coming out?

Samsung's next flagships are set to debut earlier than usual next year, with Samsung expected to unveil its S21 line on January 14th, ahead of shipping on the 29th. If you live in India, you can already pre-book your S21. A deposit of ₹2,000 (about $27) secures your place at the front of the line when pre-orders begin properly.

The season of the Galaxy S21 is fast approaching, and I'm sure we'll learn more about it as its release looms closer. Personally, I'm happy with what we know already. I'm a big phone person (and also a big-phone person), so I'll be getting the Ultra once again. The S21 and S21+ getting downgraded to 1080p panels is a shame, and the fact they have identical camera hardware to the base S20 is unfortunate. I'm most anticipating the Exynos 2100 because the current Exynos chipset I have in my S20 Ultra is certainly disappointing. If Samsung can finally match Qualcomm, it'll be a big step. With January fast approaching, we'll find out soon enough.

The internet won't break on older Android devices in 2021, thanks to certificate authority's ...