As noted by several users on social media and verified by our own Manuel Vonau in Germany, Facebook is temporarily disabling some features for Messenger and Instagram users who are based in the European region. The development has been revealed via in-app alerts which attribute "new rules for messaging services" as the cause for the change.

The notification doesn't detail which features will be disabled but simply claims that Facebook is working on bringing them back soon. But according to The Verge, polls aren't available on both Messenger and Instagram; some other features such as personalized replies in the former and stickers in the latter are also not available. 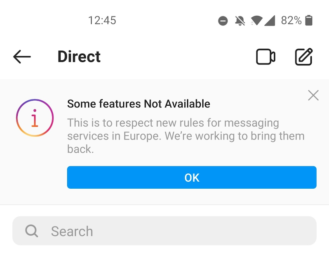 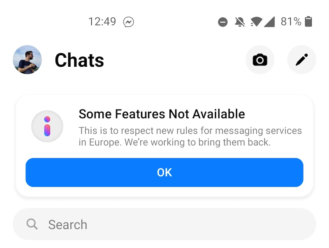 These aren't the only features to be disabled though. More are also said to be affected but it's difficult to point out which ones exactly since Facebook hasn't given any clarification. So, if you reside in the European Economic Area (EEA) and hit unexpected issues, they'll most likely be due to this new development.

These temporary changes are said to be in compliance with the national implementations of the 2002 Privacy and Electronic Communications Directive (e-privacy Directive), which seeks to set out more specific privacy rights for European users on all sorts of electronic communication.

It's not known when Facebook will reinstate these features but an official spokesperson told The Verge that most would come back "very soon."

WhatsApp to offer insurance and pension products in India