Google has built on the success of things like Project Treble to increase the pace of Android update rollouts. Last year, Android 10 was the fastest-deployed update ever. But it looks like Android 11 has just barely beaten the number of active users in the wild compared to the same time last year. 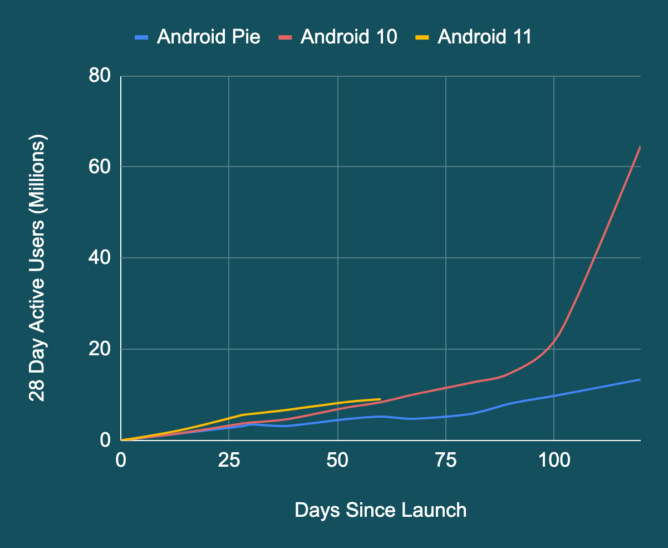 The news comes courtesy of Google's announcement today regarding a longer update window for upcoming Qualcomm chipsets, and is almost certainly a benefit of improvements that make it easier for phone makers to deploy updates, including Project Treble, Mainline, and GSIs.

Do note, Google lists the rollout here on a per-unit basis, rather than as a percentage, which makes it hard to gauge just how much the rollout speed has improved, given the growth in the overall smartphone market. While Android 11 right now clearly has more active units than Android 10 did this time last year, the market may have grown so much since then that this constitutes a lower percentage (and a lower normalized rate) but a higher total number — we can't be sure without better data.

Unfortunately, Google stopped providing version distribution numbers, which would better illuminate how this year stacks up to last year. Still, there are slightly more phones running Android 11 in the wild than there were Android 10 phones this time last year, making it the fastest rollout for any Android version yet — if not by percentage, unarguably by user — though the current trajectory indicates that might not be true in another week or two.

Future Android phones may get 4 years of updates, thanks to Google and Qualcomm