Back when TikTok's fate was still uncertain, YouTube debuted its own quasi-TikTok competitor called Shorts. It's only been a few months since then, but the company is already experimenting with new ways to get more viewers watching Shorts, including potentially replacing the Chromecast icon in the top bar of the app.

In one form of the current test, the Cast button gets removed from the top section of the app with a new Shorts icon taking its place. Another iteration of the experiment sees the Shorts icon sprouting up in the bottom navigation bar where it kicks the Explore tab up top, where it might replace the Chromecast icon. 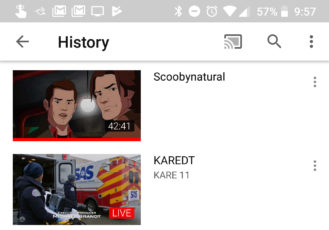 That Cast icon in the top bar may not be long for this world.

While some may question the choice of rearranging an app's navigation just to promote a new service, it does make a certain kind of sense for YouTube here: Short video platforms like TikTok seem to be the hot new thing, and while I'm sure some people find the Explore tab useful, I've never been one of them. Even the test that switches out the Chromecast icon for Shorts is justifiable — people know about Chromecasting by now, and you don't necessarily need the icon visible until you go to watch a specific video.

But is this really the best move for users? YouTube isn't sure, which is why these changes are being tested with a limited group of users in India while the company gathers feedback on the alterations to decide if it should move forward or not with a more global rollout. For those of us not chosen to participate in the tests, the new Shorts icons are just an idea — at least for now.

Samsung thinks it's Pixar now, gives Up the one thing it was missing: SoC product placement