Christmas is coming up, and before all the gifts are open, there's one thing you should remember: Most of those snazzy new gadgets need to be charged. But before you toss a five dollar Amazon special in little Billy's stocking to go with his new Nintendo Switch, keep in mind that you get what you pay for. Although the dark days of dangerous and out of spec chargers are mostly past us, we still think it's worth throwing a few extra bucks at a known-good charger. To help your purchasing decision, we took a look at a handful of different models from Aukey's current charger lineup, from 18W to 100W and $15 to $50.

We reviewed seven chargers in total: Aukey's 18W Minima, and six from the new Omnia series in 20W, 61W, 65W, and 100W sizes, including multi-port models. These are all new gallium nitride chargers, which means they're way more compact than the stuff we've been using for the last decade. Though they're starting to become commonplace, we're still excited about the change. Multi-port chargers are still larger than their single-port brothers, but Aukey's current lineup features some of the most compact models you can get. 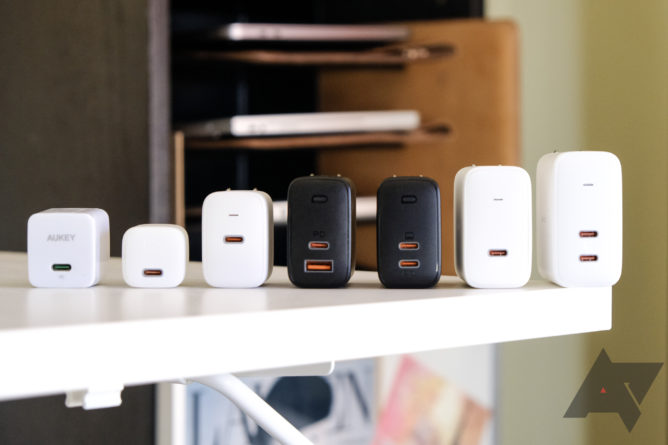 Most of the chargers we looked at share a similar physical design (outside the 18W Minima), but there are a few notable exceptions. Aukey's super-tiny 20W Omnia charger doesn't' have folding prongs — perhaps its only drawback. I also have to point out that it's the smallest USB PD charger I've ever used, tinier than even the Anker PowerPort Atom PD 1, and only around 2mm larger to each side than Apple's diminutive and ubiquitous 5W USB charger. 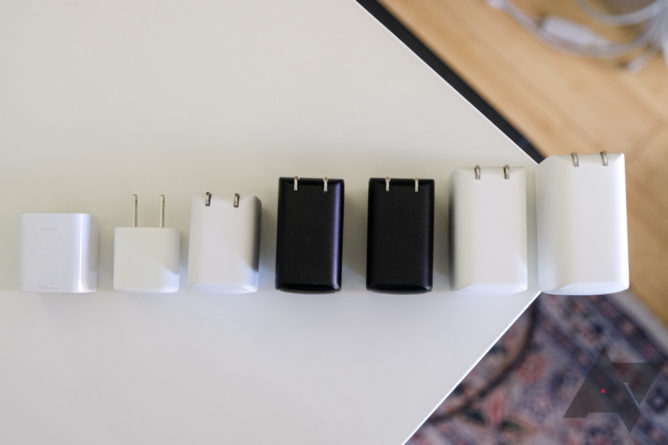 Because I've been asked before: The 18 and 20W chargers are the only models that will not block another wall outlet under any circumstance. However, all the chargers are non-polarized and have their plug near a corner, so they can all be used in either orientation in a way that won't block the second port in a standard duplex outlet. Port locations vary slightly. Some models place the output near the middle of the face, like the 61W Omnia, but most position them closer to the edge, stacked together if there are multiple outputs. Some of the chargers also offer indicator lights that glow when connected to power.

We're trying out a new format for our charger testing with this review. The table below is meant to show supported PDOs at a glance, which is the most important detail for 99% of our readers. Tests for individual PDOs show within spec as green (read: good) and outside spec as red (read: bad). Concerning but technically okay values are orange. Voltage ranges are for extreme max/min values across the complete current load range for a given PDO and they really don't matter to most folks, but they're there for those who need them.

Our test bench results were measured with our new PassMark USB Power Delivery Tester (with PPS!), Satechi USB Type-C meter, Etekcity laser thermometer, and AVHzY CT-2 USB meter. All tests were performed with one USB Type-C device connected to the primary/highest-power port. Ambient temperature was ~72°F, max temperature was measured after ~30 minutes at maximum wattage or 60W (the highest our load tester can sustain for that period).

Testing the multi-port models, the 100W two-port charger provided up to 45W per port with two devices connected at all listed voltages. The 65W two-port charger (2x Type-C) provided 45W to the top port with two devices connected, at all listed voltages, while the bottom port only supports 5V, 9V, and 12V at up to 18W. The 65W Type-C + Type-A charger can provide up to 45W across all supported voltages with a Type-A device connected. All chargers report USB PD 3.0 combability and meet that specification, though none has the latest PPS charging technology. All chargers worked as expected in more anecdotal testing with things like Chromebooks, laptops, and phones.

For context, the reason we test and list PDOs is because they're the single most important factor in determining which charger suits your needs. Some devices can be very picky and only work at one or two voltages/PDOs. For example, if you have a laptop that only accepts 15V or 20V, a charger that can only do up to 12V won't work with it, even if it offers enough wattage at other voltages to charge that laptop. Other devices, like the Nintendo Switch when docked, are also picky about their PDOs. In short: We list and test PDOs so folks in the know can buy the right charger for their devices.

We also explicitly test each PDO to ensure it delivers across the full range of current it advertises to ensure proper performance. In the past, we've run into some chargers that drop voltage below spec limits or which cut off long before their rated current — issues that could prevent it from working correctly in normal use. Because some devices can even be picky about precise voltages they'll work within, we also include those values across the full current load range.

(Also note: I lost my power meter in a recent move, so I couldn't measure power factor or efficiency — sorry. I bought a new one, but it won't be here for a while, and I'll add those measurements when I can.)

The 18W and 20W chargers we tested don't support higher voltage levels some devices like laptops might require, so they're better suited for those looking for a phone or tablet charger. All the higher-wattage chargers support the full range of voltages any device should require, and they all performed very well in our testing, excluding some high temperatures noted with the 61W charger.

Aukey's current lineup of chargers is quite good, meeting our expectations and PD specifications easily. The only real drawback I observed in my tests was high temps when running the 61W charger at its maximum rate for extended periods (over half an hour or so). That probably won't be an issue in normal use outside topping up particularly chunky laptops, but it's something to be aware of — it's hot enough to cause mild burns if left in contact with skin for that period. Folks hoping to use the multi-port chargers with more than one device should also note that the output levels always drop on chargers like these when connecting more than one device, and the two ports don't always behave the same in isolation, either.

There's also a 90W charger in the Omnia series that offers two USB Type-C ports paired with a Type-A for even more flexibility, but we weren't able to get our hands on one. Though I expect it should meet the same general standards as the other Omnia series chargers, it might have even more unusual multi-device behavior. 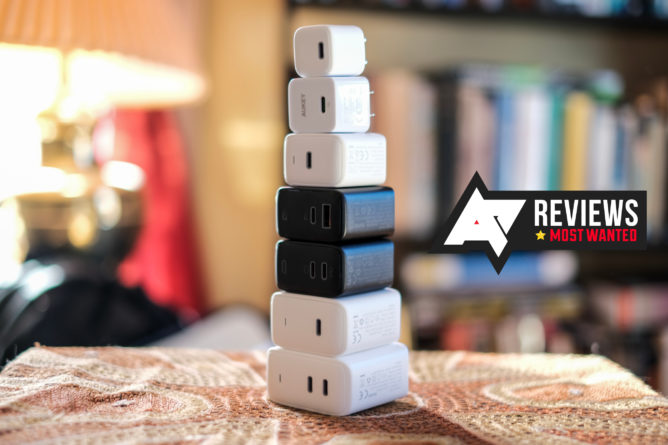 Prices obviously vary, but the chargers aren't especially expensive, either. The super-tiny Omnia 20W starts at $15 at the time of writing (with an MSRP of $20), but even the 100W two-port charger only runs $50, and Aukey does frequent sales and offers in-page coupons. Prices for the middle models varies, but they're mostly around $30-40. By virtue of being smaller GaN chargers, these prices are a little higher than bigger, older, hotter models, but the benefits are worth the now minor difference in cost. The only real bummer is that some models are on a greater discount or promotion than others, so if all you need is a specific wattage, consider checking all those in the range you're interested in — a multi-port model could be cheaper.

That said, Aukey's chargers exceeded our expectations and met spec in all our testing. Paired with the compact design and comprehensive lineup (and outside the temperature issue with the 61W charger) we're happy to give the chargers our Most Wanted award.

You can buy Aukey's current charger lineup (the 18W Minima and Omnia series) at Amazon: