Over the weekend, the Google search website briefly turned gray and black for some people who use a dark theme on their desktop computers. It looks like the company was testing a proper dark mode for its desktop website, but by now, it's already disappeared for those who initially got in on the test. If we're not in for another flip-flopping experience á la Google Maps (which had its own dark mode appear and disappear multiple times over the year), we might soon be able to enjoy our web searches dunked in an eye-soothing dark mode.

The dark mode we spotted on both Chrome and Edge looks pretty much identical to the one you can see in the Google Search Android app. The Google logo loses its colors and turns white, and the background of the whole website is dunked into a dark gray. Link colors are reduced to pastels, and the section separators and card outlines are a little brighter than in light mode. Overall, it looks pretty finished already, with no weird readability or coloring issues to be seen. Another variation, pictured below, leaves parts of the colorful Google logo intact, but that might only be because it's one of Google's many Doodles. 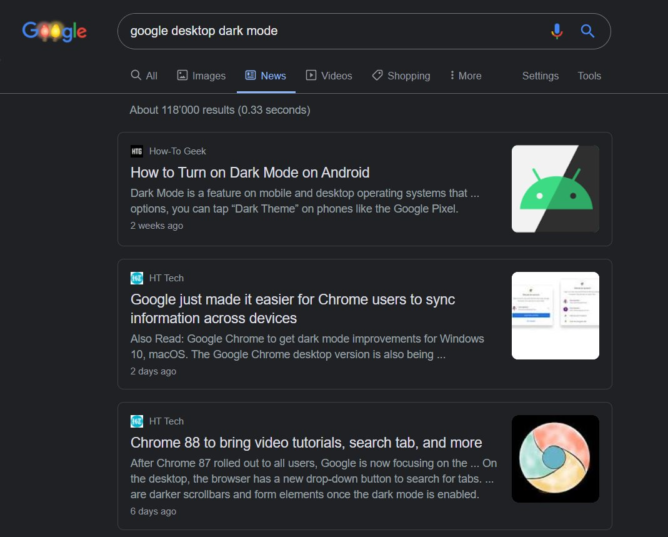 Let's hope that Google will soon start rolling out dark mode to everyone. Maybe the company will even bring it to mobile while it's at it. In the meantime, you can get a glimpse at a fully dark web by enabling the Force Dark Mode flag (at chrome://flags/#enable-force-dark), but be warned: A lot of websites will look broken when you go this route.