In a major blow for the many millions of us who rely on its services, Google is currently experiencing an outage affecting various products in different locations around the world. Gmail and YouTube are among the apps currently not available to users, and we've been able to confirm ourselves that the outage is ongoing in the UK, Germany, and India.

Reports started circulating on Twitter that YouTube was down, and when we checked we noticed other Google services are also in the same boat. It now appears that Gmail, Photos, Calendar, Drive, Docs, and so on are also struggling right now. Downdetector confirms this, with its map showing outages mostly centered in Europe but also reaching other areas in every content.

When I try to load Gmail, I get the following message telling me that my account is temporarily unavailable. If you try to use the Google apps launcher, you'll likely see this error message. At least when you try to use YouTube you get a nice illustration of a monkey in a red hat. That's something. I can also confirm that Nest is down for me, which means I can't access any video feeds from Nest cameras in my home. Even the Discover feed on Android phones has been unavailable. It's a similar story across most of Google's apps right now, on both mobile on desktop. Some people might find that using an incognito tab or accessing services without being signed in will work, so the issues could have something to with Google accounts specifically. We'll keep an eye on the situation and update here when we learn more.

It appears as though all Google services are back to normal now and the Google Workspace Status Dashboard confirms this — all of the apps are now showing a green "no issues" status. 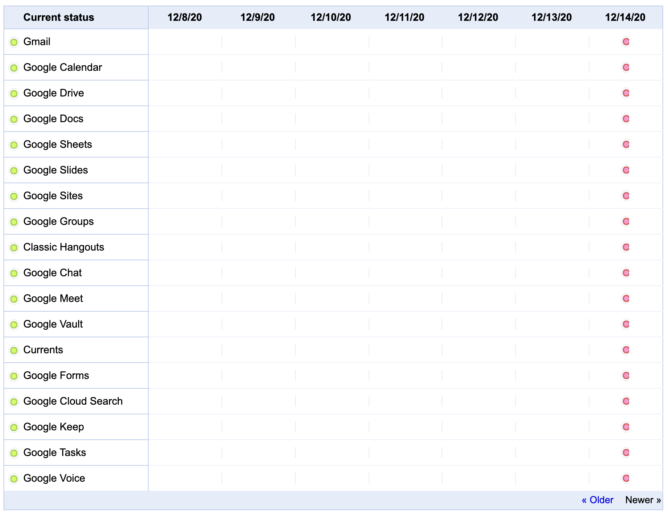 Thankfully, the outage was pretty brief, even though it was widespread and global in nature. Fingers crossed whatever caused it is now fully dealt with and we won't have to go through that same rollercoaster of emotions again any time soon.

We’re all clear folks! Thanks for staying with us.

Through the Twitter account for Google Cloud, the company has explained that the widespread interruption that we all saw earlier today was caused by an "authentication system outage" that lasted about 45 minutes. This was due to an internal storage quota issue, which sounds like an entirely avoidable problem — but what do we know.

Today, at 3.47AM PT Google experienced an authentication system outage for approximately 45 minutes due to an internal storage quota issue. This was resolved at 4:32AM PT, and all services are now restored.