YouTube TV isn't cheap. Subscribers do get a lot of channels for the money, at least, and now it looks like they might be getting even more than they bargained for. Google just started sending out emails to some current users inviting them to claim a free Chromecast with Google TV — but hurry, because the offer expires later this month.

The email tells subscribers they're eligible for a free Chromecast (in the white color) if the offer is claimed by December 31. While the last time we covered a deal like this it was only available for brand-new YTTV accounts, this time it's specifically for established users: to qualify you need to have been a subscriber since the beginning of June, 2018, with no pauses or cancellations up through now. 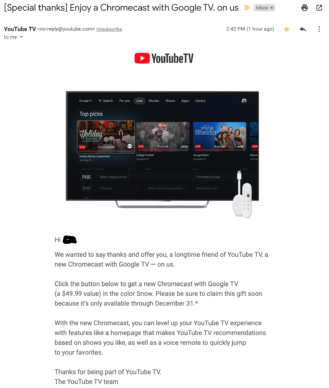 Here's the email that some current YouTube TV subscribers are receiving.

The new Chromecast brings the Google TV interface with it. We think it's one of the best ways to enjoy entertainment on your TV, so YouTube TV subscribers are in for a real treat, especially considering the device normally retails for $49.99, which makes this kind of like finding an unclaimed $50 bill lying on the ground.

If you're ponying up cash for YouTube TV each month, you may want to double-check your inbox — you might just have a nifty little email from Google waiting for you.

Waze adds tons of Santa stuff for Christmas, just in time for you to not drive to Grandma's ...