December's Pixel Feature Drop is upon us, rolling out a handful of new features for the Pixel 3 and later Google devices. That includes familiar features trickling down from the Pixel 5 to older phones, like Hold For Me and Extreme Battery Saver, but also some new benefits, like an Adaptive Sound feature that leaked last week, in-app translations via the App Overview, extra home screen customization options, the ability to export your Now Playing song recognition history into YouTube Music playlists, and an Adaptive Connectivity feature to move between 4G and 5G based on the app you're using — and that's not even all of it.

In case you weren't aware, every three months, Google releases one of these "Feature Drop" updates for its Pixel phones, delivering a handful of extra features on top of the usual monthly security patches and functional fixes. The "fourth" Pixel Drop would have landed when Android 11 was released — it's up to you if that counts as one or not. Often Feature Drops include trickle-down features for older Pixel phones (as in the case of today's update), but they also usually debut entirely new features — making them quite a perk for Pixel ownership.

When it comes to trickle-down changes, many recent Pixel 5 and Pixel 4a 5G features will be making their way to older phones, including the Assistant-based Hold For Me feature that lets Google's voice assistant sit on the line while you attend to more important duties, notifying you when you're no longer on hold. There's also the Extreme Battery Saver feature, which is coming to older Pixels, and further improves battery life by decreasing screen timeout, limiting which apps you can use while disabling features like Wi-Fi and Bluetooth scanning. Google claims it can stretch your phone out to last up to 48 hours. Duo screen sharing that landed just a few months back is also rolling out to group calls (on Wi-Fi or 5G connections), and the new Google Photos editor is getting a couple new suggestions to play with when editing photos.

However, there are new features to look forward to, like the Adaptive Sound feature that leaked last week. It uses the on-device microphone to constantly re-tune speaker output to suit the environment. That sounds a whole lot like the real-time adjustments recent Sonos speakers like the Move use, interesting given the ongoing lawsuits. The Pixel 4a 5G and Pixel 5 will also get more accurate GPS while walking — sure to be handy with the Live View AR navigation — and Google Lens is picking up the ability to translate websites and apps from the App Overview/multitasking menu.

Existing features are also getting slightly better with this update. Adaptive Battery works better now on the Pixel 4a 5G and Pixel 5, stretching out battery life even longer. There's a new Adaptive Charging feature that sounds a lot like Apple's Optimized Battery Charging, extending overall battery health by adjusting the rate the phone charges at when plugged in overnight — presumably, so it hits full just before you need to use it, decreasing long-term stress on the battery. There's also a new Adaptive Connectivity feature that dynamically switches the Pixel 4a 5G and Pixel 5 between LTE and 5G connections based on the app you're using, probably part of the newly renamed Adaptive Connectivity Services app on the Play Store. And the Pixel's Now Playing music recognition feature will be able to export items from its history into YouTube Music, making it easier to pull any songs you hear in the wild into custom playlists.

It's not all about function, though. Google's also paying attention to form, giving Pixel owners a handful of new customization options. That includes additional settings to add new icons, grid views, and app shapes in the launcher, as well as new sources of backgrounds via Google Arts & Culture. New Mandalorian-themed wallpapers are available as well, in conjunction with the earlier AR experience. 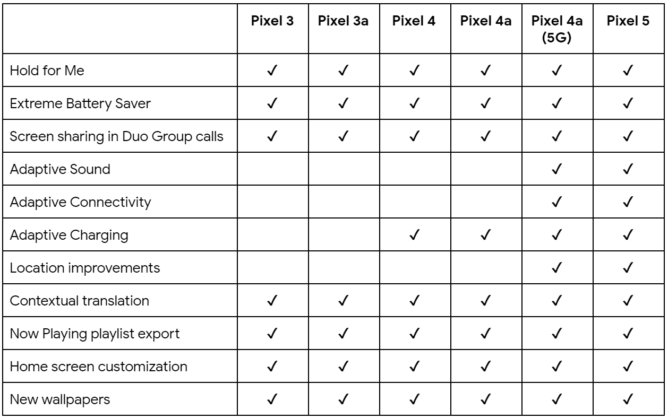 Table of which phones are getting which features.

Lastly, Pixel owners should note that, although the Pixel 2 series is getting its last update this month, it has apparently been excluded from these Feature Drop changes. All of the features you see above are for the Pixel 3 and later.

Pixel owners can start mashing that check for update button. The feature drop should be rolling out as this month's update for Pixel devices starting today.