Google first introduced "hum to search" capabilities for the Google app back in October. Now the company has partnered with Billboard to publish a list that charts the top 100 songs people have searched for by humming or singing into the Google app and Google Assistant.

Coming in at number one is, unsurprisingly, Old Town Road. Lil Nas X took the music industry by storm with his pop/country crossover hit, but since he's a newcomer to the scene, it makes sense that people would have to hum to figure out the man reasonable for the smash hit of the summer. 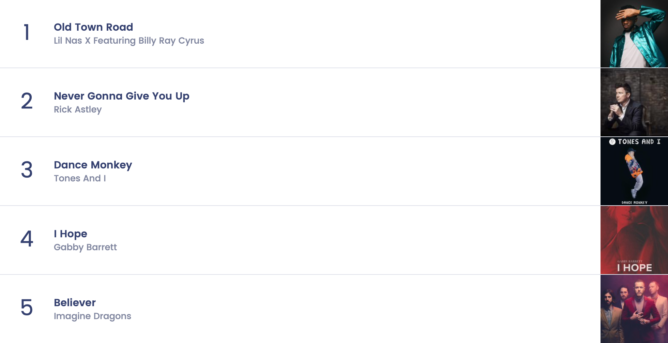 The top 5 most-hummed songs according to Google search.

The rest of the list includes many songs you might expect, such as modern hits like Therefore I Am by Billie Eilish, as well as classic bops like Team by Lorde. Baby Shark was the 25th most searched for track, apparently. But nobody could have guessed that this song would make the list.

If you're in the mood to relive some musical history and see which songs were hummed the most, head over to Billboard and put your dancing shoes on. And remember — if you ever need to identify a catchy tune that's bouncing around in your head, it's as simple as saying "Hey Google, what's this song?" and humming like an idiot into your device's microphone.