The Samsung Galaxy S10+ might have been replaced by the Galaxy S20+, but it's still far from outdated — it's very much competitive with this year's upper midrange phones and doesn't come with a battery-hogging and space-wasting 5G modem. Samsung continues selling its old flagship, and right now, you can get the 128GB version for only $549.99 on Amazon, which is $300 off. The 512GB variant is also off $300 and costs $799.99.

In his review, our own David Ruddock found the S10+ to be the jack of all trades of its time — it may not have had the best camera or the best fingerprint sensor, but it offered the best overall experience. He called it the best smartphone to buy at the time, and while that's already almost two years ago, it's still competitive compared to current mid-rangers going for the same price. The S10+ comes with a Snapdragon 855 coupled with 8GB of RAM and a 6.4-inch curved Quad HD display. You'll find three rear cameras consisting of a wide, ultra-wide, and telephoto lens, and two front cameras. In contrast to many current phones, it even still has a headphone jack. 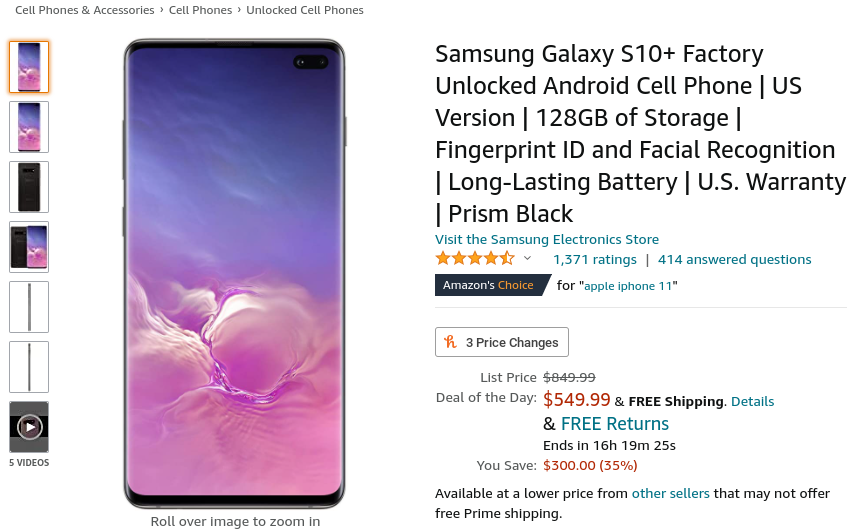 $550 is the lowest we've seen yet — before, we spotted the S10+ for as much as $600. The offer is Amazon's deal of the day, so you only got until midnight to grab it, if inventory even lasts that long. And with the S21 (or S30?) basically around the corner, the company might soon stop selling the phone altogether.