Although we've seen plenty of concepts and prototypes over the last year or so, ZTE is now technically "first" to reveal a phone with an under-display camera. That's right, the Axon 20 5G has no notch, no camera cutout, and almost no bezel. The front-facing camera can work right through the screen.

First, since it's a new phone, let's get the specs out of the way:

Internals place the new Axon 20 5G somewhere on a level with the OnePlus Nord and Moto Edge. The Snapdragon 765G is no slouch, and paired with plenty of RAM and storage, this looks like your usual just-sub-flagship phone for 2020. Well, almost. By far, the most interesting detail of the new Axon 20 5G is the display and its built-in camera. Honestly, we've got a few questions for how it all works and whether it has the sort of issues previous concepts did. But based on the renders provided and the details included in the announcement, it sounds like ZTE was able to make it all work, even if some of the particulars are still unknown.

There are a few interesting details, like "color synchronization" between the camera and the display, which make it sound like the camera may be capturing images between the PWM flashes of the OLED screen, which would be pretty wild, though that's also paired with a specific pixel matrix design and specialized software for the front-facing camera. 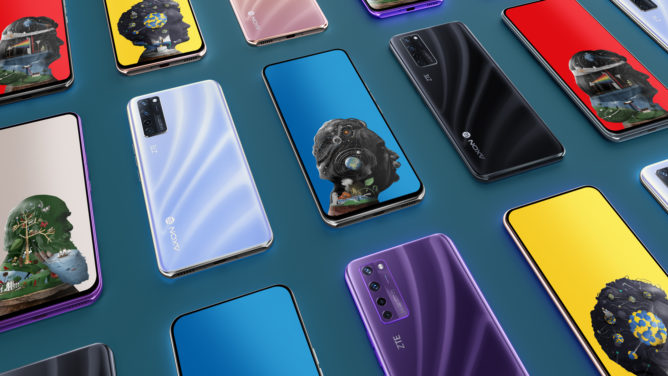 ZTE has made the whole "in-display" thing an outright theme for the phone, too. Not only is the camera beneath the display, but so are the fingerprint sensor (less interesting) and the speakers (more interesting). It's also pretty thin, which you wouldn't expect for a first-generation product sporting an exciting new layered technology like this.

Unfortunately for most of our readers, ZTE has only announced availability for the Axon 20 5G in China. Pre-orders open today for RMB2,198, and there's no word regarding shipping dates or other markets, though I'd really like to play with one.

With this news, ZTE has beaten Xiaomi to the punch. Just a few days ago, Xiaomi announced its own intention to release a phone with an under-display camera sometime in 2021.

After spending the autumn only in China, ZTE has announced that it will begin distributing the Axon 20 5G internationally starting December 21.

Prospective buyers in the following regions can sign onto a space-limited waitlist to get first dibs on the phone as well as other benefits:

It appears that the 8GB RAM/128GB storage configuration will be the only one making the leap out. Pricing details are due out later.

This Spotify artist is your Google Assistant's worst nightmare