Stadia doesn't have a ton of original content, but Google's working to correct that, however slowly. Case in point: Outcasters, a new exclusive developed by Splash Damage, whose credits include contributions to high-profile series like Halo, Gears of War, and the Batman: Arkham games. It's nothing like you'd expect in light of Splash Damage's pedigree, but it is a fun little morsel, and it's free for Stadia Pro subscribers starting today.

Outcasters is a competitive isometric twin-stick shooter. The twist is that the big, slow projectiles your goofy character fires can be redirected mid-flight to hit opponents hiding behind obstacles. That works differently depending on your preferred input method: with a mouse, you set the trajectory before shooting using the cursor. But by default, with a controller, shots can briefly be steered after you fire using the right stick. Both are fairly intuitive, but they're also pretty dissimilar, and it seems like being able to aim after firing should be a distinct advantage for gamepad players. 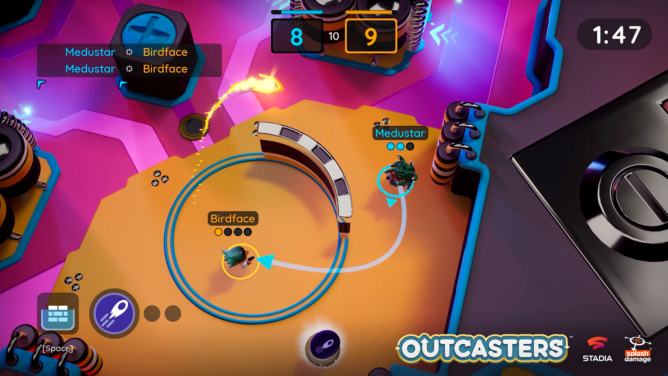 Matches take place with eight players on battlefields with whimsical themes: desserts, pirates, aliens — my favorite so far is a giant pinball table. There are three gameplay modes: Team Battle, a 4v4 match where the first team to 10 knockouts wins; Last Caster Standing, a sort of battle royale mode, complete with a shrinking perimeter; and Gold Rush, an interesting spin on king of the hill where your team vies to control a "bank" not for a certain amount of time, but until enough coins are deposited. It's a shame that you can only play the game online, though — there's no split-screen local multiplayer.

There are simple power-ups that do things like enhance your shots' speed or make them ricochet when they hit walls; you can hold up to three at a time, and stacking duplicates of the same power enhances its effect. Knocking out an opponent rewards you with one of their held power-ups and a recovery heart. You can choose a secondary ability, too, like the power to push nearby enemies back or jump over some walls to escape or attack. These secondary skills are unlocked through gameplay, as are cosmetic items for your character.

Performance is generally good, although I did occasionally see some out of place low-resolution textures. I also encountered a bizarre glitch where I fell off a ledge and, instead of taking damage and respawning, flew around under the level until I quit the match. Gameplay can stream in up to 4K and 60 frames per second, which is a boon, but it's hard to ignore that the colorful, shiny visual style is really similar to Fall Guys — and considering that game was announced a year before this one was, that might not be a coincidence. 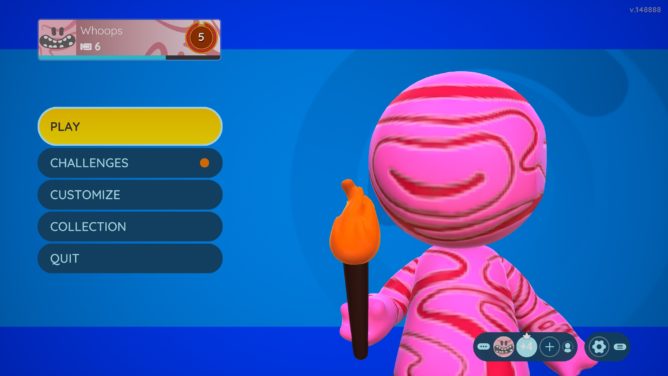 If Outcasters sounds pretty simple, that's because it is: this isn't a particularly deep experience. Overall, though, if you can corral enough Stadia-playing friends together for a few matches, you'll probably have fun. And if you've got a Pro subscription, there's no reason not to check it out — it's included starting today. Otherwise, maybe hold off: if you're not a member, it'll run you 20 bucks, which is a little steep for what's on offer here.

You can play Outcasters right now by clicking here.

This Spotify artist is your Google Assistant's worst nightmare