We've known for more than a year that Google Play Music's days were numbered. Its death had even been officially announced, but it's now really, really (really) real. Google sunset the GPM app on Android and the web at the end of October, providing the knock-out blow to what has been a rather short match — and now it looks like the funeral procession has finally finished its march.

Open the Android app now and you'll likely be greeted by a white splash screen with a Play Music logo that morphs into a YouTube Music one. Bold text tells you GPM is no longer available and explains that you can transfer your whole library to YTM. Two buttons are provided below that, one to kickstart the transfer process and another to manage your data. The latter takes you to the GPM site where you can download and delete your full library, and delete your recommendation history. Once you're done, the app's widget should disappear by itself from your home screen if you had added it there.

It's a clinical, irreversible death. While it didn't affect everyone right away (kind of like a perverse, anti-rollout), GPM appears to be dead for everyone now. Those of you wondering whether manually changing your phone's date would undo that final blow, let me save you some time: I tried, and it didn't work.

What Google didn't think of is an easy way to manage your locally-stored data on your phone. If you've downloaded music for offline listening, you can't do that anywhere within the app now, and that data will still take up space on your phone. So you'll either have to uninstall the app, or if your device doesn't allow you to do that, you need to tap and hold on the app's icon in the drawer, go to App Info, and then select Storage. There, you should be able to clear the GPM's cache and offline music.

If GPM was your local music player of choice, and you don't care much about streaming, you can also migrate to YouTube Music for that. But we've also put together a list of 8 great local music players on Android. You should find an apt replacement there.

The web client at music.google.com is gone too. It just offers the same options we saw above. 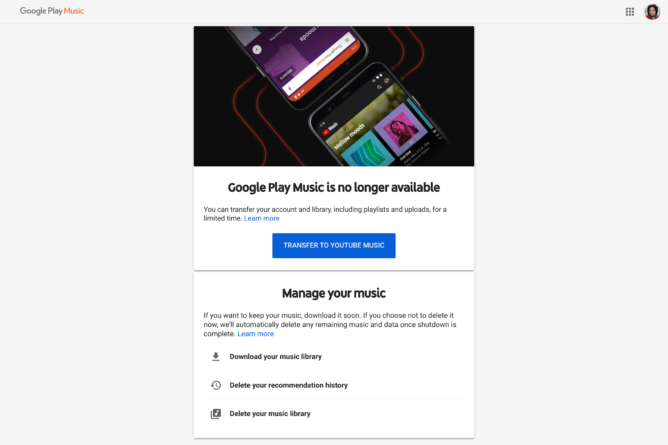 It may have been the most drawn out death of all time, but Google Play Music finally appears to be gone on all platforms for everyone.