Samsung Internet is one of the best browsers for Android, as it combines the Chromium web engine with a customizable interface and limited extensions support. After the last major update arrived in June, a new version began rolling out last month with design changes, new features, and a core engine upgrade — and now Samsung is announcing the full list of what users can expect to see in the update.

The first change is that the internal Chromium rendering engine has been updated from v79 to v83. That means most of the new APIs and security fixes in Chrome 80, 81, 82, and 83 should be present. I'm excited to see the Web Share API Level 2 is finally supported, which allows web apps to send files to native Android apps. Samsung has also added a few new APIs for extensions to use, including webRequest (most notably used by content blockers), Proxy, Cookies, and History.

There are also a number of user-visible features, like the new permission request UI that displays a warning message if Samsung thinks the website is suspicious and trying to trick users into enabling notifications. For Secret mode (Samsung's take on incognito), there's a new icon that will show up on the address bar to clearly show when it's enabled. 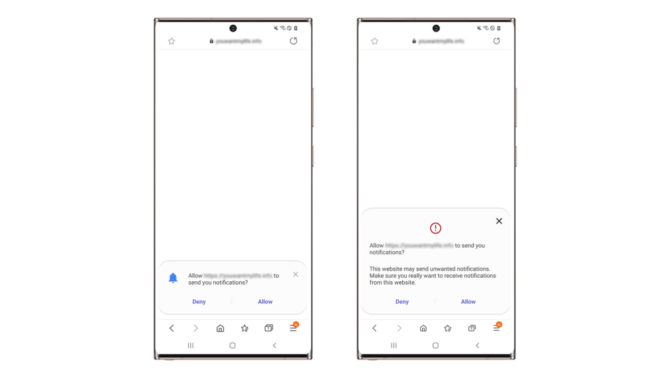 Along with the revamped permissions request interface, bookmarking a page will now show an Edit button on the confirmation message, so you can quickly change the title and other details without finding it in the bookmarks list. On tablets (or phones with the tab bar option enabled), tabs now have a more rounded shape. The bottom action bar and other elements have also been updated to better match One UI 3.0. In addition, Video Assistant now lets users pause a fullscreen video by double tapping the middle of the screen.

Finally, Samsung Internet 13 includes some new settings to play with. You can now enable high contrast mode at the same time as dark mode, and there's a new option to hide the status bar while scrolling. The new update is rolling out on the Play Store, but if you don't have it already, you can also get it from APKMirror.

Samsung Internet v13.0.1.44 is now (slowly) rolling out to non-beta users on the Play Store and Galaxy Apps store. We also have it on APKMirror, but as of the time of writing, we don't have an ARMv8 (64-bit) version available.

Updated with new details and images from Samsung.