Amazon has been producing Fire TV streaming sticks for several years now, but most of them have been mediocre at best. That’s what you’d expect for the bargain-basement price Amazon is charging. The cheapest 1080p-only Sticks have used bottom-of-the-barrel processors, making them unbearably-slow compared to a Chromecast or Roku, though the upgraded hardware in the Fire TV 4K isn't nearly as bad.

For the first time in four years, Amazon has updated the internal hardware for the cheapest 1080p Fire TV Stick, finally giving it the performance boost it so badly needed. However, the software is still frustrating to use, even if it does offer some features not offered by the Fire TV Stick's competitors.

The latest Fire TV Stick looks identical to the last-gen 1080p model. It's a black plastic rectangle with a male HDMI connector on one end and a microUSB port on the other. You'll probably plug this into the back of your TV and never look at it again, so the design doesn't really matter. In the rare event this will be sticking out the side of your TV, the black exterior is at least inoffensive. The Fire TV Stick supports 10/100 Mbps Ethernet, but just like the new Google TV dongle, you'll need to purchase a separate adapter if you want to use a wired internet connection. Amazon sells one for $15, but since Fire OS is based on Android, other adapters with a power pass-through could work.

The most important upgrade with the new stick is the upgraded hardware. The previous entry-level Fire TV Stick used a 1.3GHz Mediatek 8127D chipset with 1GB RAM, while this new model has a 1.7GHz MT8695D SoC with the same amount of RAM. Amazon advertises the new stick as "50% more powerful," and having used the older model for an extended period, the performance difference is absolutely noticeable — more on that later. 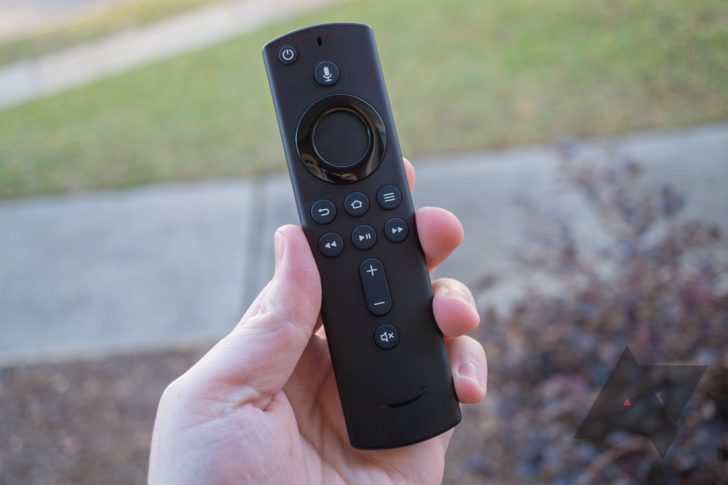 Another important feature is the included voice remote, which lets you speak to the Alexa digital assistant. You can tell your Fire TV to control smart home devices (if they are connected to your Amazon account), play/pause/skip/rewind whatever you're watching, search for content, open apps, and anything else Alexa can usually do.

The remote is also capable of controlling your TV's power and sound level over IR, just like the remotes that ship with Roku products, the Google TV dongle, and other competitors. Even though Amazon crammed the software full of ads, the remote itself doesn't have any buttons tied to specific services, which is appreciated. There are no HBO or Netflix buttons to ignore (or accidentally press).

In the box, you get the Fire TV stick, a microUSB power cable, the voice remote, two AAA batteries for the remote, a wall power adapter, and an HDMI extension cable.

Even though the hardware has received a significant upgrade, the software is unchanged from other Fire TV products. You start with the 'Home' tab, which displays all your installed applications and various content recommendations. Scrolling right on the top navigation will take you to sections for specific categories, such as Live TV, free content, movies, and TV shows.

I'm not the greatest fan of the Fire TV interface. Unlike Android TV, which allows apps to easily display their own content on the home screen, all of the tabs primarily serve as content recommendations for Amazon Prime Video. Even though Fire OS does seem to allow applications to add their own content to the home tab, none of the apps I use (Netflix, YouTube, Plex, Pluto TV, and Hulu) work with it. Besides the incomplete content pages, Fire TV also has a lot of advertising. Amazon allows advertisers to show giant banners, advertising rows, sponsored screensavers, and sponsored tiles. Most of the ones I've seen are for Amazon-owned content (e.g. shows on Prime Video or IMDB TV), but I don't like staring at ads every second I'm scrolling through menus. Roku and Google TV devices also show various ads, but they aren't as intrusive as on Fire products — for example, Roku's advertising is mostly limited to a single banner on the side of the home screen. Unlike with Amazon's Fire tablets, you can't turn off the ads.

That said, there are some positive aspects to the Fire OS software. Amazon is an established presence in the smart TV market, so just about every media service already has a Fire TV app. The included Alexa assistant can do everything a dedicated Echo smart speaker can do, and there are some TV-specific commands to open apps and search for content. Amazon supports child profiles, too, so parents can restrict kids to age-appropriate content. I was also happy to see the Fire TV Stick allows you to connect Bluetooth headphones for private listening, just like the Google TV dongle.

Fire OS is still based on Android, so as with previous Fire sticks, you can sideload select Android and Android TV apps that aren't available through Amazon's own app store. We have a guide on how to install APKs on Fire TV, if you're interested.

Performance is also a high point for the new Fire TV Stick. I hated using the earlier 1080p-only sticks, because they were among the slowest devices I've ever used with a TV, but this updated model is a significant improvement. I'm no longer left waiting for the interface to catch up after clicking on a new page or opening an application, and there's only a short delay when using Alexa commands (just like with Echo smart speakers).

If you really need Alexa and other exclusive Amazon features, yes. The new Fire TV stick is a substantial improvement from its laggy predecessor, and the MSRP of $39.99 is a great price (it's $12 off right now), but it still has the same clunky software experience. The entire interface is a billboard for Amazon's services and third-party advertisements, but if you're knee-deep in the Amazon ecosystem, it is at least functional. Alexa works well, the remote is simple to use, and you'll likely never run into a media service that doesn't have a Fire TV app.

The new Chromecast with Google TV is giving Amazon a run for its money this year. It's slightly more expensive, but it comes with a cleaner interface and 4K support. Roku's entry-level Streaming Stick is also still a compelling option, though it trades advanced functionality (like a voice assistant and Bluetooth listening) for a super-simple interface.