Every year, Google asks Play Store users to vote for their favorite apps, and that's no different for 2020 — the contest was open through November 23. Now the company has announced which developers won the sought-after user award and has also revealed which apps and games have received trophies from Play Store editors.

Play Store users could choose from a selection of nominees consisting of apps like Vimeo, Microsoft Office, Whisk, Disney+, Reface, and more, and apparently, most people loved Disney's new streaming service the most. That's no surprise when you consider that the service has been downloaded more than 50 million times on the Play Store as of November 2020, a number only one other, less sexy contestant (Microsoft Office) could compete with. 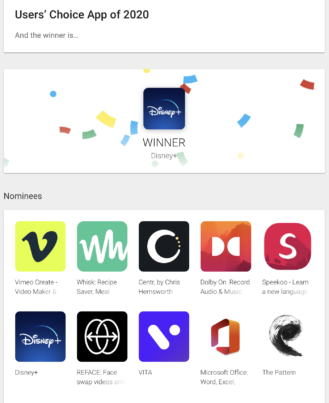 Play Store users were asked to vote for their favorite game, movie, and book of the year. The Users' Choice 2020 winners are:

The Play Store editors also sat down to decide which apps and games they like the most, and in contrast to the Users' Choice Award, there are more granular categories. In the editors' opinion, Loóna was the best app of the year, a wellbeing service that helps you calm down and fall asleep better with original music and immersive stories.

Many other developers have also received smaller awards as part of other categories. You can check them out here: