When it announced the new Chromecast, Google heralded its new Google TV interface layer as an excellent content discovery experience aimed at helping you find what to watch without worrying about the logistics of the 'where' and 'how.' In many ways, the promise is fulfilled and we think you won't be disappointed at all by your $50 purchase. But if you don't live alone and have kids, a roommate, or a partner with a different taste, the experience is far from ideal. Google TV is clearly built for a single user, from the homescreen to Assistant and various other apps. You might think you can add multiple accounts, but those only work for some limited services and don't affect the overall interface. This restriction isn't new: it has existed since Android TV's inception and has yet to be removed, unfortunately.

Multiple accounts but not multiple profiles

Opening Google TV's side panel lets you uncover what looks to be an account switcher in an Apple TV-like UI. In reality, it's just an account indicator, as you can't switch between different signed-in users. You're free to add as many email addresses as you want, none of them really matter for the main experience. (They're only available when logging in to apps, which I'll address later.) 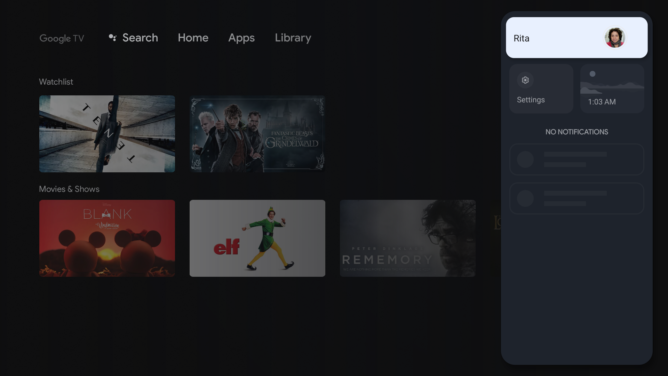 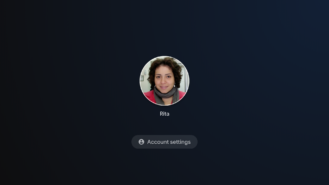 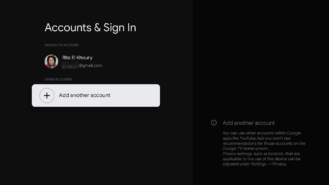 The first signed-in user is the only one that can choose which streaming services they'd like to see content and recommendations from, pay for purchases (renting and buying), and link in their Google Assistant. 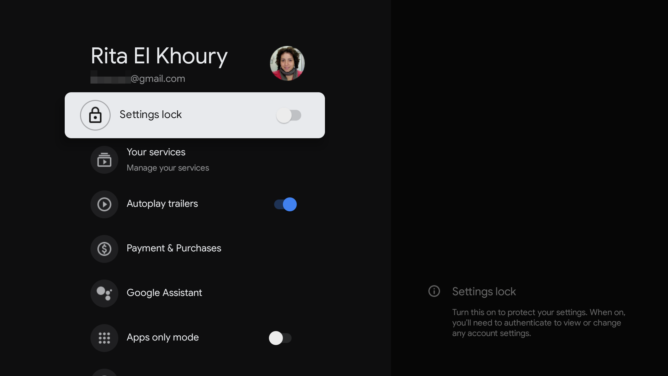 All secondary users have no access to any of those settings. This means your partner can't buy things with their own credit card, your kid can talk to your Assistant (though, obviously, without Voice Match compatibility, they can't access personal results), and your roommate can't have their own streaming services linked to the homescreen. 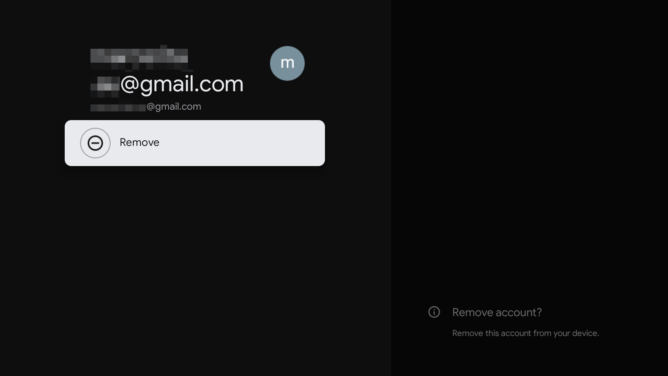 Other accounts get nada.

The end result is a single-profile homescreen that's perfect for one, useless for many. The For you tab is for the single "you," the Library tab is linked to your Google account only, and the wishlist is synced with your Google account, so you're the only person who can edit or access it from a phone or the web. If your partner or roommate wants to watch movies or shows they rented on Google with their own account, they're out of luck. The only workaround is to start playback on their phone and cast it to the TV.

Even something as simple as the app icon order isn't customizable per user, so for example if you love Netflix but couldn't care less about Hulu, but someone else has the opposite preference, you both have to agree to keep those two icons in the main app row for easy access. 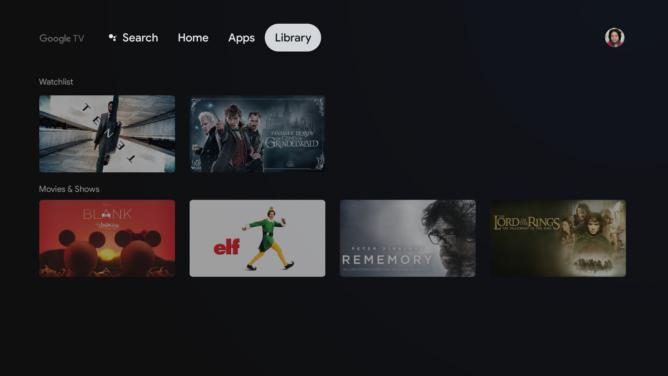 This is my library, my wishlist. My husband doesn't have access to his purchases or wishlist.

Granted, in some households, this may not be an issue. It isn't a big hurdle in mine because my husband and I share a very similar taste in entertainment content, but I can easily imagine it would be far from ideal if we had kids or different tastes, which is the case for a lot of people living under the same roof.

Moving on from the homescreen, almost everything else about Android TV and the Google TV layer on top is still geared toward single users. If I change a certain setting, it gets modified for everyone, and there are no per-profile preferences. The same applies to Google Play Games's achievements and progress. One account is supported, so the others can still play but their advancement will be synced to the same account. 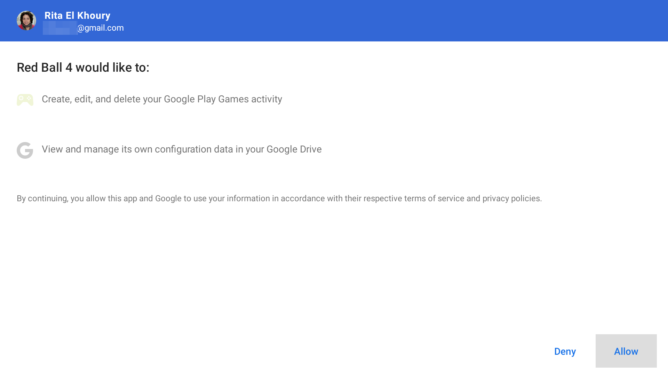 Syncing Play Games activity is limited to one account only.

Some limitations in other Google apps

Other Google-made apps are a little more lenient about supporting multiple users, but still do it a little awkwardly. The Play Store lets you switch accounts easily to download purchases or make new ones, but you have to know how to get to the Play Store in the first place as there's no icon to launch it. (Hint: say "Ok Google, open Play Store," it's the fastest way.) 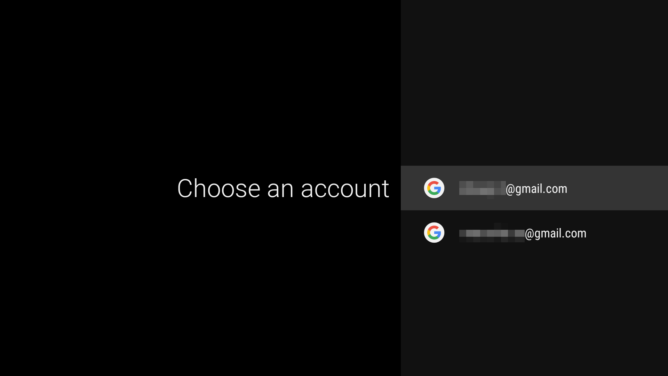 The Play Store's account switcher, if you know how to get to it.

YouTube is a little more annoying about it. You have to sign out of the current user/profile to sign into another one. Even if you have multiple channels/profiles on YouTube under the same email address, you can't switch between them without logging out then in. It's tedious and unnecessary, and I doubt anyone will bother with it if they only want to find a video (i.e. they're not interested in accessing their own subscriptions or lists.) That's how the main account holder on Android TV finds themselves with videos in their history that they never really watched and recommendations they have no interest in. 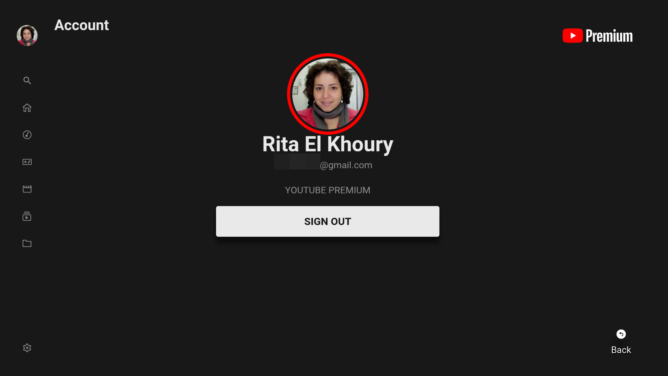 You have to sign out to be able to sign in another user or channel. Very few will bother to do that.

Third-party apps to the rescue

The only respite you get while using Google TV is when you delve into third-party apps. Most of them have learned to overcome this single-user platform-wide limitation by offering easy switching between multiple profiles or accounts inside their apps. Spotify, Plex, Netflix, Hulu, and plenty of other streaming services do it, so every member in the household can enjoy their own content without messing up with everyone else's history or recommendations. 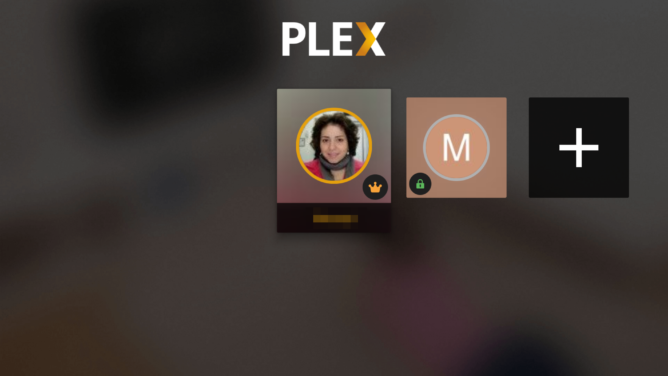 Oh, looky there, different profiles?! What kind of black magic is that?!

For single-user or small households with few members in a similar age group and sharing similar tastes, Google TV provides a neat, lean-back, discovery and consumption interface. But personalized content can't be that, by definition, if it affects one person's account but takes input from plenty of users in the household. Your partner or kid or roommate should have their own profile with their customizable settings, preferences, history, recommendations, wishlists, purchases, game progress, Assistant, and more. Third-party apps with multi-user or multiple profile support might make things more tolerable for some, but they're not a real solution to the bigger problem.

At a time when people are staying indoors more than ever and watching content on their own TVs, Google has to find a way to make the experience more enjoyable for everyone, and there's nothing to stop it from doing so when Apple TV, PlayStation, and Xbox have already solved that.