The Samsung Galaxy S20+ is an absolute powerhouse of a phone, and unfortunately the price when it came out reflected that. The phone was originally $1200 when it launched, putting it out of reach for many of us. Fortunately, after some time has passed, the price has fallen — and it's reduced even further thanks to a sweet deal this Cyber Weekend. You can get a factory-unlocked Samsung Galaxy S20+ for just $842.13 ($157.86 off), the cheapest the US model has been, on Amazon.

The S20+ runs on a Snapdragon 865 chipset with 12GB of RAM, so it's a pretty snappy user experience. The phone also comes with a 6.7" AMOLED display and a 64 MP telephoto lens which shoots in up to 8K resolution. Alongside that, you'll get 12 MP wide angle and ultra-wide lenses. The device has 128GB of storage out of the box, but that's expandable via microSD, if you need more. This is also the American, factory-unlocked version of the phone, meaning you can use it on any GSM or CDMA network. 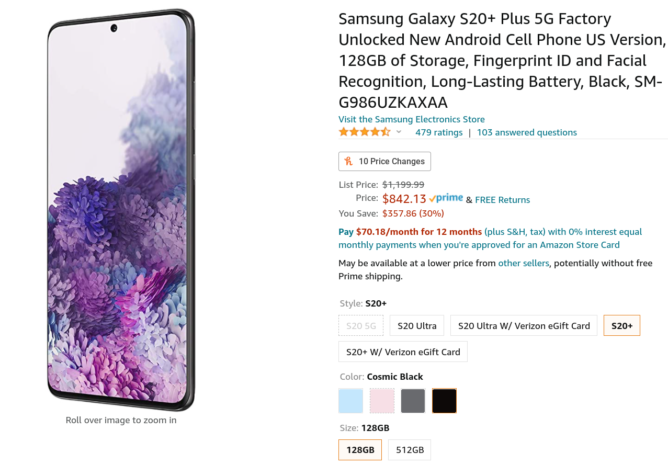