Google Photos is full of great memories constantly resurfacing in the Instagram Stories-like Recent Highlights that show up in the carousel at the top of your photos. The company has decided to tweak the collages consisting of multiple pictures that show up there with doodled backgrounds, making them more shareable on social media without further effort on your part.

This week, we’re rolling out new collage designs that help you relive your memories in fun and delightful ways. These collages are automatically built for you in Recent Highlights, so you can easily share in just a few taps. pic.twitter.com/PkMUYnnscR

Google introduced the new designs in a tweet earlier this week, and now, they've started showing up on more phones. While Google's example collage has a blackboard-style background with chalk paintings imitating polaroid film, one of our tipsters' automatic creations comes with a brighter background that would be most comparable with paper and stamps. Their photos look like physical copies put on top. 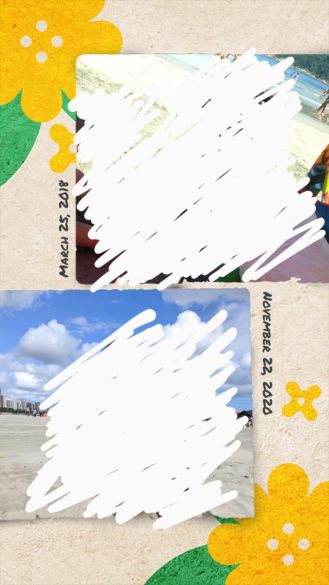 Another variation that popped up in one of our tipsters' Photos.

So far, these new collages seem to be limited to the Recent Highlights carousel — when we tried to create them manually by selecting multiple pictures, hitting the plus button, and choosing Collage, we received the familiar version with boring white borders and frames separating the individual images.

The new collages are rolling out as a server-side update, so be sure to check your Recent Highlights to see if you're in on the fun. You can download the latest version of Google Photos from the Play Store or over at APK Mirror.

Rock out anywhere with this JBL Xtreme 3 all-weather Bluetooth speaker for $315 from Amazon ...