Google's RCS-based messaging initiative has reached one major milestone today as it announces preparations for another. As of today, Google's RCS is available worldwide (with a handful of seemingly permanent exceptions), and end-to-end encryption will start rolling out for beta testers this month.

For the unfamiliar, RCS is a new standard for messaging essentially meant to replace the aging SMS many of us still use with a data-based solution, enabling things like typing indicators, higher quality media. Initially, the onus was on carriers to roll out a replacement, but after they inevitably messed that up, Google took matters into its own hands with its own Universal Profile-based "chat" standard, built right into the Messages app.

We've been following its rollout for months, and according to Google, it's now "complete" and available in every country that will get it. Notable exceptions, based on the map below, include China, Cuba, Iran, and Russia. However, we should note that some of us still don't see it working in Messages at the time of writing — at least one of us on T-Mobile has been having trouble with it over the last week or so, and another in Germany is also not connecting. 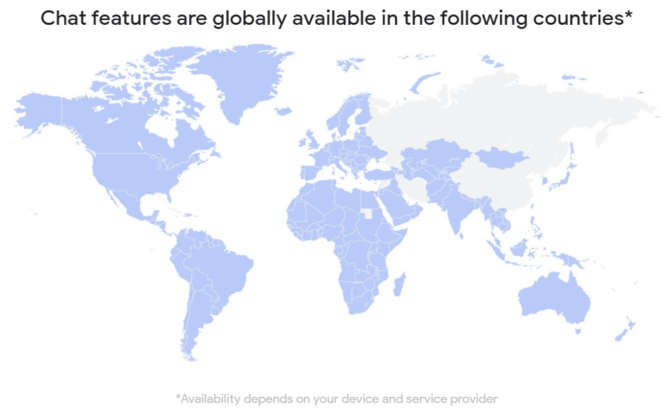 Among the few drawbacks in Google's RCS solution was the lack of encryption, but the company has announced that it's coming to the platform soon. It will be tested first later this month for one-on-one conversations for those in the Messages beta, with wider support planned next year. Once it's enabled, neither Google nor your carrier can read messages in transit.

It's been a long journey, and though US carriers still ostensibly have plans for their own cross-compatible Universal Profile-based RCS system, none of that matters now. Google has finally delivered on its years-long plans to bring better messaging to Android, and in markets where carriers have failed, Chat in Messages can plug the gap.

OnePlus’s cheapest phone, the Nord N100, turns out to have a 90Hz screen after all

Smartwatches from Fossil, Skagen, and more start at just $169 in Amazon's Deal of the Day