Google has flipped the switch on its new Google Pay app and site slightly ahead of schedule. Though a formal release is still scheduled for just a bit in the day, the Play Store listing for the new app has expanded to the US, and you can download it now.

For context, Google has been teasing a new Google Pay experience for the last several months. Following a redesign of the Indian Tez app with Flutter, we knew the app would eventually spread to other markets and replace the incumbent Google Pay. Based on the app's registration process, currently supported markets include the US, Singapore, and India. 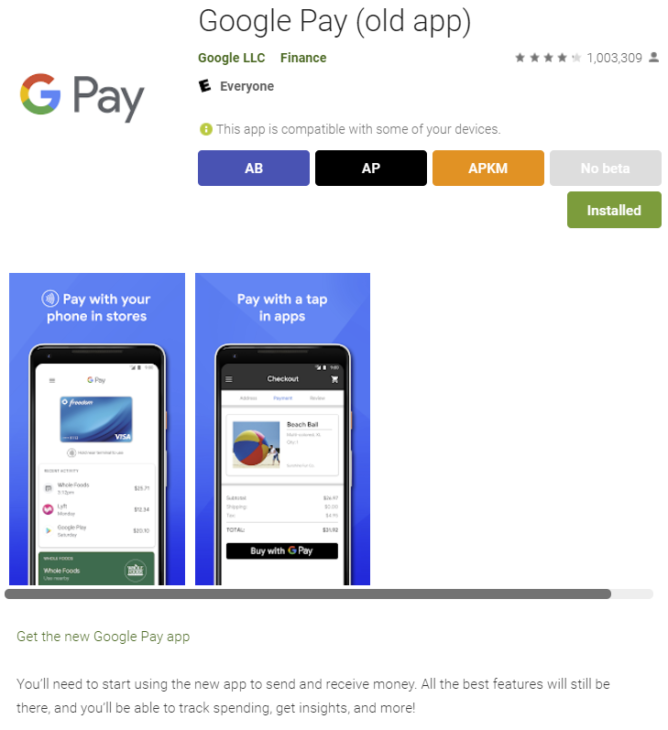 The old Google Pay app listing is pushing folks to the new one.

Branding in the app is slightly inconsistent, labeled "G Pay" in some areas "GPay" in the app drawer, and "Google Pay" in spots, though the Play Store listing says "Google Pay." It's also important to note that this new app doesn't fully take over for all payment duties. Contactless payments will continue to be provided by Play Services as the old app is apparently deprecated, and this new Google Pay app appears to be taking over for Google Pay Send for things like settling debts between friends and splitting expenses, though it has a shortcut to the Play Services-based NFC payments up at the top of the screen.

The app has a three-tab navigation system between three sections: Explore, Pay, and Insights. The first section lists offers and promotions for rewards, and has a shortcut to scan Google Pay QR and bar codes. The second is the default screen when the app is launched with shortcuts to pay people or businesses. You can also order food from over 100,000 locations or pay for gas at participating gas stations. The third shows your current account balance, spending for the month, and Google Pay balance, and it can also be linked to your bank or credit card accounts via Plaid for additional insights and transaction history — pretty cool, actually. You can also waitlist Google's new Plex banking service, expected to go live next year.

To pay someone, tap "People" in that middle tab and you get a contact list you can search through with what appear to be your starred contacts already visible. (This section is also loaded with some spammy options to invite people to the new Google Pay). You can also scan a QR code or start a group to split a bill.

The setup process has options for signing up for dynamic reward offers based on purchases, plus other customization based on purchase data, which you can opt-in for on either a permanent basis or a three month trial period. The app itself can be protected by PIN, pattern, or biometric authentication. Performance was a little stuttery in my experience,

The new version of the app is limited to working on just one phone at a time, though you can switch between devices pretty easily by simply registering your phone number again. Sucks for us bloggers, but most folks probably won't have an issue.

Although some are reporting that the new app is invite-only, that doesn't seem to be the case in our testing. While you can use a referral link to sign up (and give someone else a bit of referral cash in the process), the app appears to be downloadable for anyone on the Play Store, though some folks are having issues activating it. There's also an early access program you can opt-in on. For your convenience, we also have the app for easy sideloading over at APK Mirror.

$1 OnePlus Buds sell out within seconds