Last November, the Google Home app received a colorful card-based media control interface, which was quite an improvement over the previous one. But multi-room or multi-speaker playback is rather tricky to set up through this card-based interface, and Google seems to think the same. The company has introduced a much more intuitive UI for media controls in version 2.31 of the Home app that lets you cast to individual or multiple speakers and displays on the fly. And Assistant Routines can finally be triggered through the app again following the update.

The new Media UI might not be as pretty as the previous one that generated a background based on the displayed media artwork, but it's much more useful. When you open it while no media is playing, you're greeted by the option to play music from your preferred streaming service by selecting which device you want to hear your songs on — it only takes a single tap. On the old interface, you had to first hit "Play music" and then select a device.

Above: Old interface when you want to start listening to music through the app. Below: New UI. 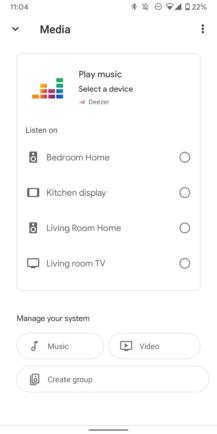 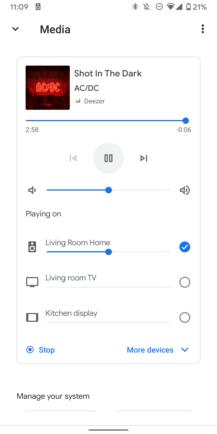 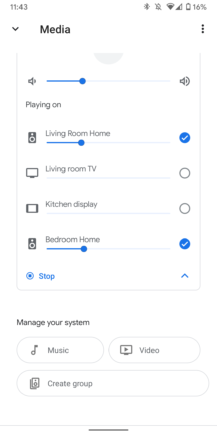 The Now Playing screen is also much improved. It still shows you all the information the old one displayed — audio provider, album cover, song name and artist, play/pause, scrub, skip, volume — but now it's possible to add other speakers or displays to cast to on the fly. All cast targets in your home are listed below the condensed player, and you can tick on or off any you want. There's a master volume slider for all devices you're playing media on and the option to adjust individual cast targets. At the bottom of the interface, you get handy shortcuts for changing your music and video provider and for creating speaker groups. 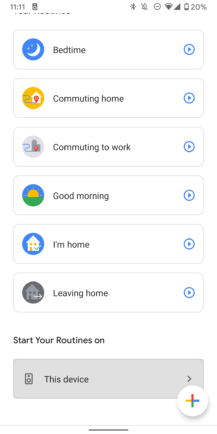 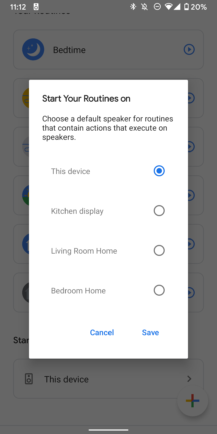 The new version also finally lets you start Assistant Routines through Home. When you tap the round Routines shortcut at the top of the app's homescreen, you'll notice that each Routine now has a play button next to it. At the bottom of the list, you can adjust on which device Routines should be started on. You can select your phone or any of your compatible smart speakers or displays. Previous versions of the Home app already allowed you to tweak Routines, but you could only trigger them via the Assistant.

9to5Google also spotted that the Wifi settings have gained a new Preferred activities entry. The outlet only saw a Gaming option that includes Stadia in there, but commenter Leeroy Jenkins below shared a screenshot showing an additional Video conferencing that "includes Google Meet and Zoom." It's possible that Google will add even more items in the future.

The new version of Home is currently rolling out on the Play Store, but if you're eager to get your hands on the new interface, you can download it right away from APK Mirror.