Are you tired of hunting for your files? Let's be honest: diving deep into a labyrinth of folders to find essential files is super frustrating. Using the files manager's search function is cumbersome, and, if you're like me, you're probably annoyed how much valuable time is wasted clicking and searching. The developers at Google realized that people care about getting their tasks done efficiently, so they tackled the clicking problem head-on to see if they could limit the number of clicks people make to get to their important files. We finally have an early preview of their solution.

Spotted recently in the Chrome OS Canary channel, Google is experimenting with a new feature that it internally calls Holding Space. Holding Space aims to increase your productivity by providing users quick access to their screenshots, recent downloads, and pinned files through the Chrome OS shelf. Here's a look:

An early look at Holding Space

It's easy to pin a file to the shelf. In the video, I right-click one of my PDF documents from inside the file manager, then select "[Needs | 10n] Pin to Shelf" (definitely placeholder text) in the context menu to pin the file to the shelf. Clicking on the Holding Space button on the bottom right portion of the screen launches a shelf widget that shows an overview of your pinned files, recent downloads, and screenshots.

None of the buttons are working in Holding Space right now, which is a bummer, but it has the potential to be an enormous time-saver for my workflow. As a student, I am continually downloading lecture notes and assignments from my professor's class portal. Before this update, it took an excessive number of clicks to find my files, like opening my documents folder, my school folder, the chapter folder, then to my lecture notes folder, so on so forth. But with Holding Space, I can pin my essential documents from the file manager to the shelf so I can quickly jump back to the file, saving me an enormous amount of clicks.

It's clear Google is trying its best to make Chrome OS more productive and capable than ever before. I'm excited to see Google continue to make iterative improvements into Chrome OS to make it a better platform choice for everyone.

Google released a new build of Chrome OS Canary recently, bumping the version up from 87.0.4274.0 to 87.0.4275.0. This build updates Holding Space so you can open your recent downloads, screenshots, and pinned files in a snap. To try Holding Space yourself, copy and paste chrome://flags/#enable-holding-space into Chrome's URL bar and enable it from the drop-down menu. After you restart your Chromebook, you'll see the Holding Space button next to the shelf system tray. Here's a quick demo:

You can now launch files within Holding Space in the latest Chrome OS Canary build.

As you can see, I can launch my photos, screenshots, and PDF file by double-clicking them inside Holding Space. I can also pin and unpin recent downloads within Holding Space to sort my downloads by level of importance. Right-clicking the files allows me to jump to the pinned file's source folder without having to wander in the file manager to find it. My favorite feature from this update, by far, is this:

Holding Space allows me to drag-and-drop files into Chrome apps seamlessly. I frequently download photos and take screenshots to put them in my documents. Before Holding Space, I had to go through my messy downloads folder, find the images I wanted to insert into Google Docs, copy the photos to the clipboard, and paste them into Google Docs. With this update, I can quickly drag my photos from Holding Space and drop them into my document, an incredible time-saver for my workflow.

Although the recent Canary update makes Holding Space significantly more productive to use, there are a few things I hope Google changes before it hits the Chrome OS stable channel. For example, I would prefer it if I could single-click to open the files in Holding Space instead of double-clicking, especially if Holding Space is pitched as a productivity feature. It's also unclear if Google is going to limit Holding Space to show only two recent downloads. It's less overwhelming to look at my recent downloads when comparing it to the older Canary channel build, but I feel that limiting recent downloads to two files seems too aggressive.

Despite its current shortcomings, Holding Space is shaping up to be one of my favorite features coming to Chrome OS. It is an incredible time-saver that boosts my workflow productivity by a significant margin. I'll continue to keep my eye on this feature and will update this article if I discover substantial changes.

Quickly glance at your pinned files in Holding Space

Over the past couple of months, Holding Space has received small interactivity improvements to make it more productive and easier to use. With a recent Chrome OS Canary update, Google introduced a new flag that shows previews of your recent screenshots, downloads, and pinned files on the shelf. If you're interested in trying this feature out, copy and paste chrome://flags/#holding-space-previews in Chrome's URL bar and enable the flag from the drop-down menu. After your Chromebook restarts, you'll notice a small change to the Holding Space button. 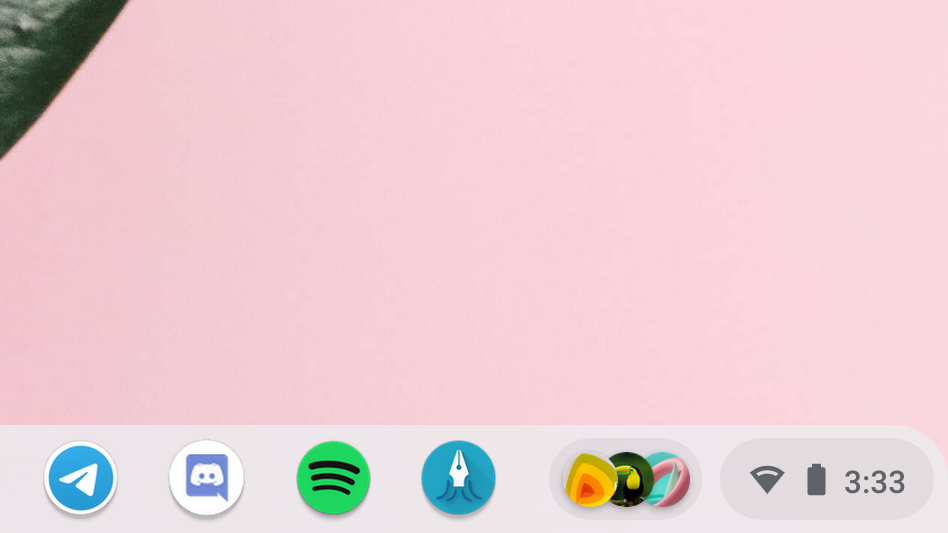 Thumbnail previews of pinned files, downloads, and screenshots on the shelf.

At a glance, we can see thumbnails of my recent files on the shelf. If I take a screenshot, pin new files, or download documents, Chrome OS will capture and add a preview of those files. Holding Space will show up to three previews at once, and adding more files will remove the earliest thumbnail from the taskbar. Displaying small thumbnails may seem trivial to some, but I find it useful to identify recent downloads and pinned files quickly.

Holding Space still has some way to go before it's ready to ship, but overall, it's shaping up to be a great productivity tool. Being able to access your essential files in fewer clicks could be a game-changer, and I'm excited to see how users will take advantage of it when it lands in the Stable channel.

Here's our first look at the OnePlus 9's design

New Gmail settings give you more control over your data