The Chromecast with Google TV isn't like your old Chromecast — it's the first to come with proper Android TV and a remote that even works with your TV or soundbar. However, that's where some problems are introduced. Depending on how you've set up the Chromecast remote, you might notice that it's become impossible to control the volume via Google Assistant or your handset when you cast from your phone. Here's what you need to know if you want to enable that functionality.

Head to your Chromecast's settings to start the troubleshooting process. Navigate to your avatar in the top right corner of the Google TV home screen, then Settings -> Remotes & Accessories -> Set up remote buttons -> Volume control. In there, you'll see three options: Auto (CEC), [Your TV name] (IR), and Chromecast Volume. 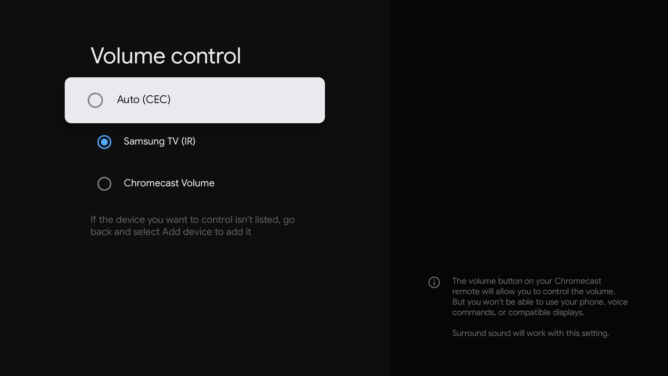 The first option, CEC, is an HDMI standard that — simply put — allows devices plugged into your TV to control certain remote functions. It's magical when it works, but most of the time, it doesn't. The second option, IR, allows you to use the Chromecast remote to send IR signals right to your TV like your regular TV remote does, bypassing the wonky HDMI solution. And then there's the last option, Chromecast Volume. 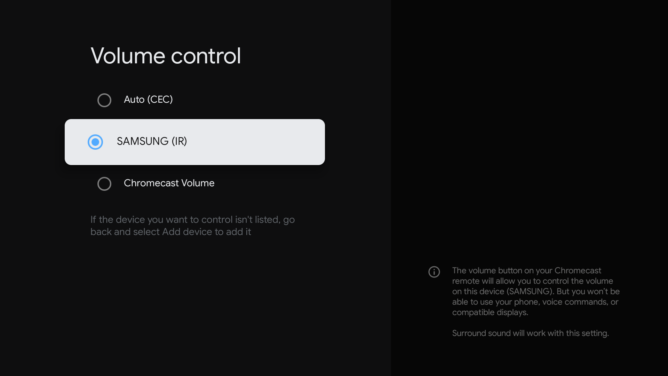 If you've set up your Chromecast remote to control your TV volume via IR or CEC, you might notice some fine print in the bottom right corner. For IR, it reads: "The volume button on your Chromecast remote will allow you to control the volume of this device ([Your TV]). But you won't be able to use your phone, voice commands, or compatible displays." You'll find that last, emphasized sentence in the CEC description, as well. 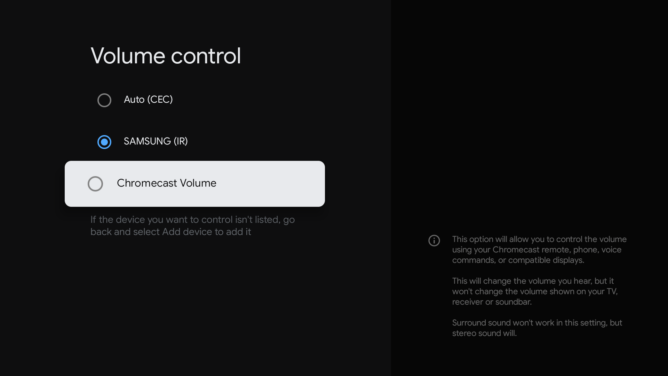 If you want to use your phone or voice commands to change your Chromecast's volume, you need to select the third option, Chromecast Volume. Voice and phone control is pretty much the only advantage this will give you, though.

As stated in the same description, using Chromecast Volume will make you lose surround sound — annoying if you've got that home cinema setup. You also won't be able to use the Chromecast remote to change your TV's volume — it'll only change the Chromecast's level, so you can't use the remote when you watch linear TV or play a game on your console.

This all-or-nothing approach is all we get — there isn't an option that allows you to leave the Chromecast remote in IR or CEC mode and change the Chromecast-specific volume independently on phones or via the Assistant. It's understandable why that's the case: You could end up in a situation where you forget that you turned down the volume via your phone and then wonder why cranking up the TV speakers via the Chromecast remote won't make your media play louder. 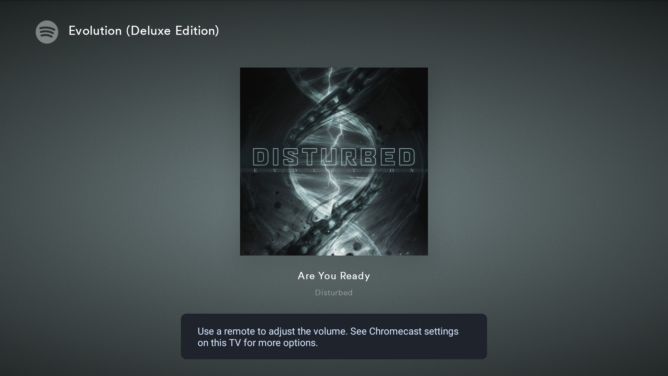 Above: Spotify, the only Android TV app with a helpful error message. Below: Working volume after changing settings. 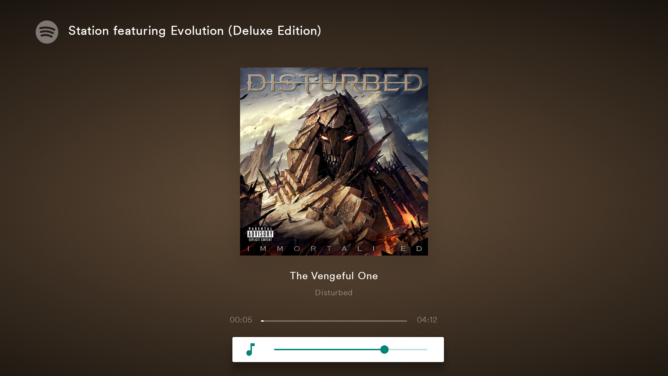 Google needs to step up its game when it comes to warning us about its approach to volume, though, especially with many people coming from older Chromecast devices. When I first set up my Chromecast with Google TV, it wasn't immediately clear that choosing to control the TV volume would make me lose voice and phone control.

The visuals surrounding the lack of volume control are particularly bad on mobile devices. On Pixel phones, the hardware volume keys appear to cease functioning altogether while casting from YouTube, with no UI indicator popping up at all. This might make you think something's wrong with your phone, not your Chromecast setup. And when you tap the cast button, it looks like you can adjust volume via a slider, but it doesn't actually change anything when you move it (see hero image at the top of this post).

Spotify is the only Android TV app we spotted so far with a helpful toast that prompted us to check the Chromecast settings in the first place: "Use a remote to adjust the volume. See Chromecast settings on this TV for more options." Let's hope that Google will adopt a message like this across its ecosystem, as non-functional volume buttons and sliders are just frustrating.