HMD Global has been one of the leaders in budget Android phones for a while now, using the Nokia brand to sell a wide variety of devices. The Nokia 9 PureView was the company's first shot a flagship phone, but it had a few issues and was only available unlocked. HMD has now returned with a new high-end option: the Nokia 8 V 5G UW.

The Nokia 8 V 5G UW is the latest smartphone that aims to bring millimeter wave (mmWave) 5G, which delivers gigabit speeds in the right situations), to the masses. It also represents HMD Global's first shot at creating a high-end device for a major US network. Sadly, between the limited usefulness of mmWave, and increased competition from Google and Samsung, there are few reasons to buy the Nokia 8 V.

If you keep up with HMD Global's product lineup, the Nokia 8 V might look familiar. That's because this phone is essentially a Verizon version of the Nokia 8.3 5G, which arrived in the United States in September. The only notable difference is that the Nokia 8 V supports mmWave 5G, while the 8.3 does not. Both phones are the same price ($700), so either this is the first Android phone without the infamous '5G Tax,' or the Nokia 8.3 has a more comfortable profit margin. 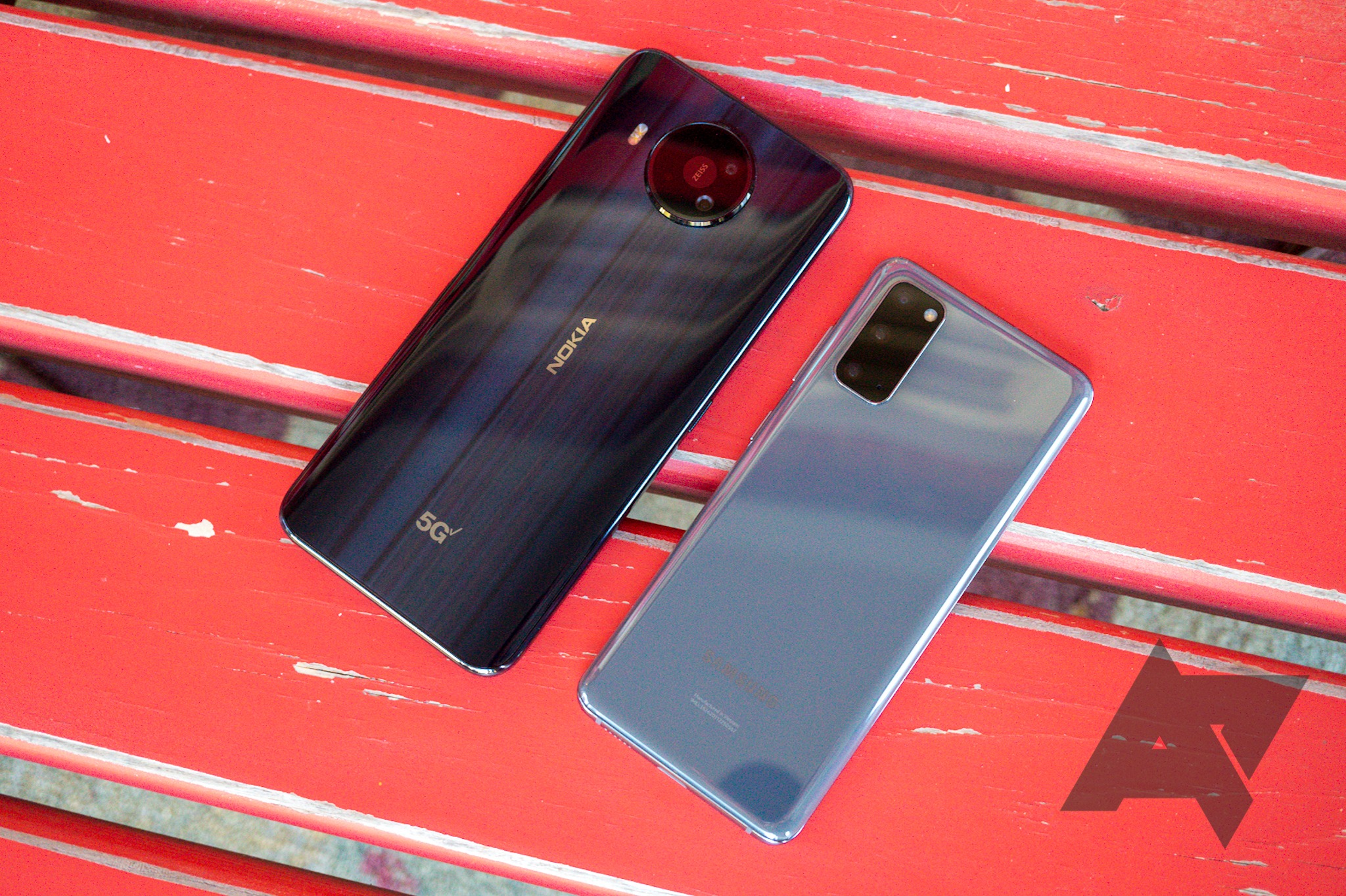 Industry speculation aside, the Nokia 8 V is a chonker of a phone. I've been using the smallest Galaxy S20 as my main phone for a few months now, and the 6.81-inch screen on the Nokia 8 V is gargantuan in comparison. The phone is physically larger and heavier than the Galaxy Note20 Ultra and OnePlus 8T, both of which are already considered by most people to be extremely large.

HMD Global has opted to use an IPS panel for the display, even though some phones hundreds of dollars less have higher-quality AMOLED screens (such as the $500 Pixel 4a 5G and £379 OnePlus Nord), and it only operates at 60Hz. There's also a substantial 'chin' below the screen, but at least HMD has stopped stamping the Nokia logo there. The back casing of the Nokia 8 V is made of glossy plastic, which looks pretty (especially when it bends light), but easily attracts fingerprints and smudges. The coating is also extremely slippery, and because the sides of the phone use the same material, picking up the phone can sometimes feel like grabbing a bar of soap in a shower. The 230g mass only makes the problem worse. I would have much preferred matte plastic, like the Galaxy S20 FE and some of Nokia's lower-end phones.

On a more positive note, I'm glad to see the Nokia 8 V still has a headphone jack. The bottom of the phone also has a USB Type-C port and the primary speaker. The speaker is capable of playing audio at a reasonably high volume, but it still sounds tinny, like just about every other smartphone speaker. 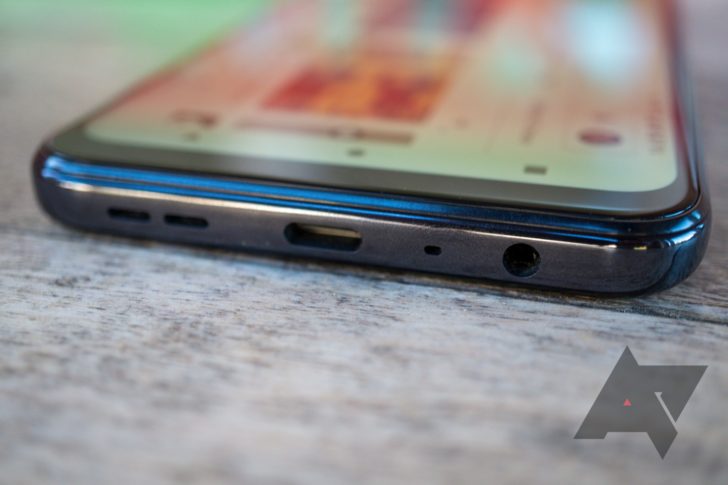 The left side of the phone is home to the Google Assistant button, which has become a staple on Nokia phones over the past year. It's advertised as 'customizable,' but the only option is a switch to turn it off. I ended up doing just that, because I kept accidentally pressing it (again, because the phone is slippery). The right side has the volume buttons and the power button, which doubles as the fingerprint reader. I rarely had issues with the Nokia 8 V detecting my finger, but it can be difficult to feel where the sensor is. The SIM/microSD card slot is also on the right side. 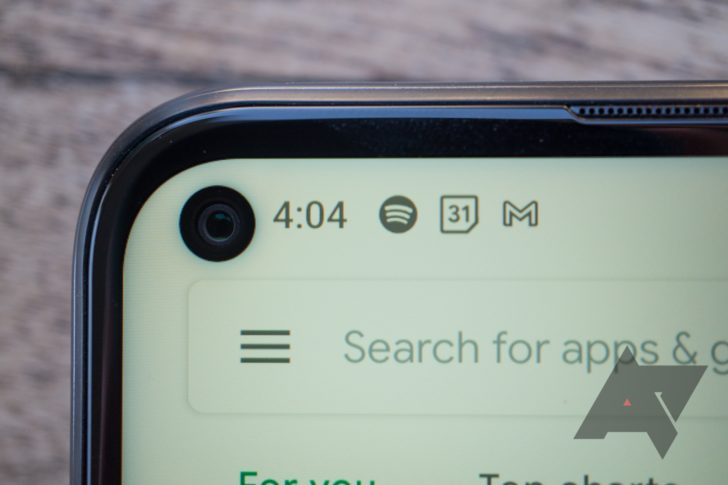 There's a shadow around the camera cutout, which is common on LCDs with cutouts

Unfortunately, the internal hardware of the Nokia 8 V is disappointing. It's using a Snapdragon 765G chipset, the same found in the Pixel 5 and LG Velvet, paired with 6GB RAM and 64GB internal storage. The Pixel 5 costs the same as the Nokia 8 V, but has more RAM and twice the storage capacity. Even the $350 Pixel 4a has 128GB of storage, so I'm not sure why HMD couldn't do better here. There's also no wireless charging and no IP rating.

In the box, you get the phone, a USB Type-A-to-C cable, and a 15W USB Type-A wall charger. The phone does not appear to charge beyond 15W, even when using C-to-C cables and different wall adapters. 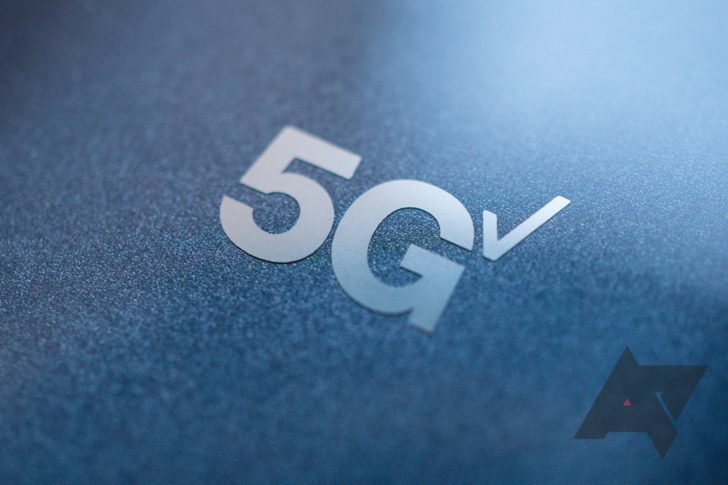 All of HMD Global's Android phones stay close to stock Android, and the Nokia 8 V is no exception. The phone has a clean build of Android 10, with an upgrade to Android 11 coming soon. Verizon does include a handful of pre-installed applications, but most of them are account management tools, and you can uninstall all the third-party apps (Audible, Yahoo Mail, etc.). Performance is great across the board — the Snapdragon 765G is plenty fast, as long as you're not playing graphically-intense games.

However, there is one critical drawback to the Nokia 8 V's software: long-term support. The phone is advertised as having "two cycles of Android updates," but HMD Global confirmed to me that the promised Android 11 update counts as one of the two cycles. That means the Nokia 8 V will get Android 11 at least four months late, then Android 12 at some point, and that's it. There's also only 24 months of promised security updates.

That level of software support for a $700 phone is embarrassing. Google's phones have offered three years of OS and security updates starting with the 2016 Pixels, and Samsung recently guranteed three OS upgrades for most of its devices. There's no excuse for HMD to not offer at least three years of security patches.

Battery life is a high point for the Nokia 8 V, at least. In my typical usage of responding to texts, occasional web browsing, and watching YouTube and Hulu, I usually ended each day with around 50-60% battery remaining. That's about what I would expect for a Snapdragon 765G phone with a large 4,500mAh battery, but still nothing to shrug at.

The Nokia 8 V technically has four rear cameras, but only three of them produce images on their own — the last one is a 2MP depth sensor only used to enhance photos from the other lenses. The three cameras of note are the 64MP primary, the 12MP ultra-wide, and the 2MP macro. The main and ultra-wide cameras can sometimes produce good photos, but colors sometimes appear washed out. Fine detail is also occasionally lost — this is especially noticeable in the below photos of trees. By comparison, the 2MP macro on the Nokia 8 V is completely useless. The entire point of a macro lens is to capture fine detail with a shorter focal length, but 2MP is far too low for any of that detail to come through. Every photo I took with it looks like it came out of a point-and-shoot camera from a decade ago. The Nokia 8 V also seems to struggle with dynamic range. The cameras performed best when the light source was behind me, but as soon as I took a photo with the sky (or other bright light source) in the frame, the brighter areas were completely blown out.

Not unless you get an amazing deal. The Nokia 8 V isn't a bad phone: it performs well, photos from the camera are mostly acceptable, and the software experience is clean. However, there's nothing that the Nokia 8 V does better than the competition. The Pixel 5 is the same price, but has twice the internal storage, 2GB more RAM, IP68 water protection, a smoother 90Hz screen (though it is smaller), a vastly better camera, and wireless charging. Nokia's device looks even worse against the Galaxy S20 FE, which has a faster chipset and a 120Hz AMOLED screen, and has gone as low as $550 in the past.

If Verizon ever drastically reduces the price of the Nokia 8 V, it might be worth picking up. Until then, there are better ways to spend your money.

YouTube's new line-art icons are rolling out on Android

Ask us anything about the OnePlus Nord N10 5G (Q&A)