If you were trying to fire up a YouTube video just earlier and ran into issues: Don't worry, it's not just you. YouTube playback was down for many at the time, with widespread anecdotal reports as well as a spike over at DownDetector. However, the issue has since resolved and YouTube is officially back up.

Both the G Suite Status dashboard and Google Cloud status dashboard report green all throughout the outage, but a quick search over on Twitter or Facebook showed widespread reports of problems.

The initial spike of reports at DownDetector.

We should note that DownDetector's general reports are usually correct in the abstract when it comes to the existence of an outage somewhere, but not especially precise: Reports can bleed over to other services that aren't actually affected, like ISPs. The outage may have affected other services as well, but combing through more organic reports indicated it was limited to YouTube and related services, seemingly including YouTube TV and YouTube Music, though the Play Store was also affected. Android Police's Taylor Kerns would like it to be known this interrupted his enjoyment of Mystery Science Theater.

Reports were widespread and didn't seem limited to any one area or market. YouTube's search and browser still worked on several platforms, but actually trying video playback stalled out trying to load, or threw an error. Sifting through reports, we noticed a handful of other non-Google service outages including regional power and some smart devices, though it isn't clear if they were related.

If you’re having trouble watching videos on YouTube right now, you’re not alone – our team is aware of the issue and working on a fix. We’ll follow up here with any updates.

TeamYouTube acknowledged the issue, noting that it was working on a fix, which has since rolled out. Upon request for comment, a Google spokesperson directed us to the above tweet. A YouTube Help forum post was also posted to keep track of the issue's progress.

Near the end of the outage, YouTube started displaying an error message, stating that "An error occurred (Playback ID: [a unique alphanumeric string goes here]) Tap to retry)." It's unclear what the root cause of the issue was, as the above statement from YouTube is decidedly vague. The outage also occurred during what is the start of prime viewing time in the US, and has generated massive amounts of complaints on social media. 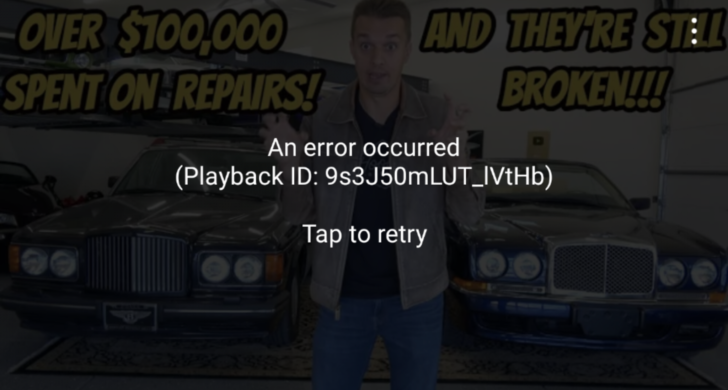 You're probably seeing a playback error like this one.

Earlier this year in September, Google had a much more widespread outage that affected multiple services, including Gmail, Drive, and Nest, mirroring a similar issue in March. A more minor outage affecting Drive also happened in September, and two more Nest outages occurred back in April and March. In short, it's been a rough year for Google's uptime.

As of around 8:39 PM ET, YouTube was starting to work again, and at 9:13 PM ET @TeamYouTube tweeted that the issue had been fixed across all devices:

...And we’re back – we’re so sorry for the interruption. This is fixed across all devices & YouTube services, thanks for being patient with us ❤️ https://t.co/1s0qbxQqc6

There's no official explanation from either YouTube or Google regarding the cause of the outage just yet, but I expect a postmortem analysis will be available in the coming days.

YouTube's new line-art icons are rolling out on Android