I've always been really interested in fun products — even if the product isn't remotely practical or "good" in the traditional sense. Sometimes a truly bleeding-edge device can give us a glimpse of the future, regardless of its flaws. That's what made me interested in the new Bose Frames when they were released a few weeks ago.

The idea of Bose Frames is to combine sunglasses and earbuds into one product by putting directional speakers in the temple of the shades right above the ear. They are the most unusual audio gimmick I've seen in a long time, and the interesting design and genuine enjoyment I get from this product makes it hard to regret my purchase. Still, most people would do better with separate sunglasses and earbuds. Most wireless audio products are designed to be utilitarian; they get the job done and they don't look great. The Bose Frames are going to be on your face, so they really ought to look good, and thankfully, they do. Bose Fames appear at first to be typical sunglasses, but there's a 16mm speaker driver in each temple — the long stem of a pair of glasses. The speakers do make them a little chunky, but you can't tell there's anything amiss unless you see them from certain angles. Personally, I like the design, but it does have a sort of "Finance Bro" look.

Bose makes three styles of the Bose Frames—the Tenor (shown in this review), Soprano, and Tempo. The Tenor and Soprano models are the same other than masculine and feminine design traits, respectively. The Tempo is athletic pair with a more aerodynamic design, better speakers, better battery, and a USB-C charging port. All Bose Frames models support prescription lenses, but they are pricy starting at $127 for single vision lenses. Bose does sell a few different normal colored lenses for the Frames, though. I would recommend picking up a pair since it's hard to have a lens cheaper than the included ones.

The sunglasses themselves are extremely comfortable. They aren't heavy and the shape fits well on my head. Unfortunately, they don't feel very premium. Bose says the Frames are made from glossy black TR-90 nylon—which is used in a lot of glasses. The result is a pair of glasses that feel unexpectedly cheap. My roommate, who has used the glasses a few times, compared the feeling to dollar store sunglasses. 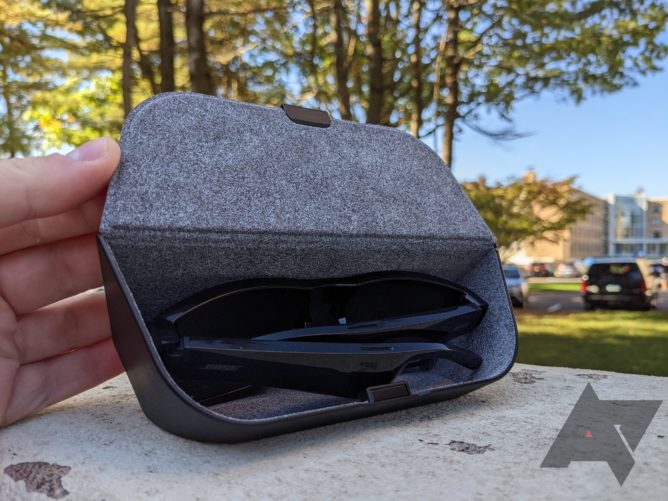 In the box you get the Frames, a carrying case, and the charging cable. The case is made with faux leather and plastic and lined with a soft microfiber but feels pretty cheap. This case is used only for carrying the Frames, and not as a charging dock. The charging cable uses a 4-pin proprietary connector and can charge the Frames in about an hour or so. 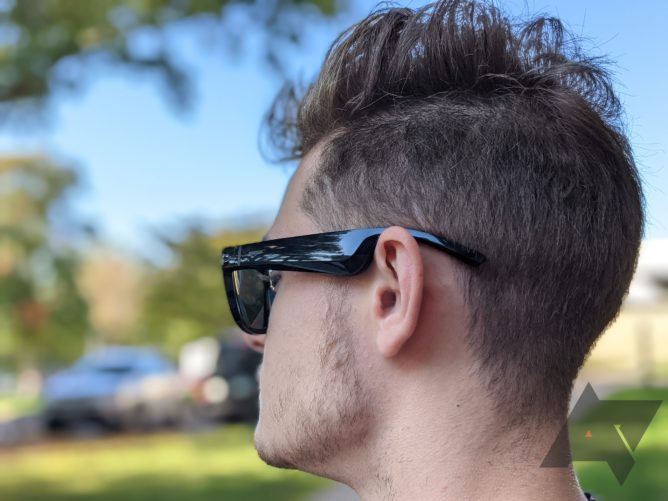 You should not expect incredible audio from the Bose Frames, but it's by no means bad. The audio sounded clear but the soundstage didn't sound rich or alive. There were a lot of highs and mids, but the lows are also lacking greatly, which shouldn't come as a surprise.

If I'm trying to get into the music or taking a long phone call, I would still grab normal earbuds 9 out of 10 times. That's not what the Bose Frames are about, though. You don't pick these up to make a phone call—you just wear them like sunglasses and enjoy the benefits of the audio features. If your main concern is microphone quality or audio quality, I would still recommend Pixel Buds or AirPods Pro or really any other in-ear wireless earbud. They will provide much better noise isolation and straight-up be better.

That noise isolation is usually important for phone calls. Calls on the Bose Frames are surprisingly good thanks to the two beam-forming microphones. They pick up enough for phone calls, but anything beyond that is questionable. The audio coming through on the other ends sounds a little roboty and tinny, but the other party was able to understand what I was saying with no issue.

You know what sucks? Terrible controls on earbuds. Well thought through gestures and controls can really make the experience of using any product better, particularly if you can’t see the controls while using them. Luckily, the Bose Frames nail this. There's a capacitive touch strip on the right temple that lets you adjust the volume or double tap to access Google Assistant or any other installed assistant app. The power button is used to turn the Frames on and off by holding but a single press will play/pause and a double press and triple press will skip and rewind, respectively. The Frames can also sense when you take them off, and they'll shut off if you flip them upside down.

Bose claims the Bose Frames Tenor and Soprano get around 5.5 hours of battery life. I've found this to be pretty close to accurate. Out of the four full battery cycles I used the sunglasses, I got anywhere from 5 to 6 hours of battery. Sometimes it missed the mark if I made phones calls or went over it with just music playback.

I've used basically every pair of popular Bluetooth earbuds on the market right now, and the Bose Frames are the ones I like using the most. That doesn't mean they are the best—the audio is objectively not as good as virtually any in-ear buds. However, Bose took this gimmick and made it functional and frankly, pretty fun.

Normally, I don't recommend buying products based on their gimmicks. Gimmicks are usually marketing points that are meaningless to consumers. For earbuds, a gimmick could be a half-baked translation or sunglasses with a camera. The Bose Frames differ because the gimmick is the product. These are unapologetically Bose Frames—they will not (and are not intended to) compete with the best standalone Bluetooth earbuds or sunglasses. That puts them into a weird category for people with plenty of disposable income who want something fun over practical. If you match this small subset of people, sure, they are well worth it.

Most people should not spend $250 on a quirky audio device that doesn’t sound as good as a $50 pair of earbuds, those with disposable income might want something fun over practical. If you match this small subset of people, they are well worth it.