It wasn't long ago that we were lamenting the "5G tax" in high-end devices. As recently as this summer, many phones were launching at astronomical prices, solely because they were able to pull marginally faster mobile data speeds in certain markets (in theory, at least). Today, 5G is still dubiously useful to most consumers, but a series of competent, competitively-priced 5G phones like the Samsung Galaxy A71, Galaxy S20 FE, Pixel 4a 5G, and, to an extent, even the Pixel 5 have changed our thinking about what 5G access has to cost.

The new Verizon-exclusive TCL 10 5G UW pushes the affordable 5G envelope even further. It's the cheapest 5G phone the carrier offers by a wide margin. It's also got respectable performance, an all-day-and-then-some battery, and just about the fastest data speeds money can buy. Unless you really put a premium on data speeds — and happen to live in a Verizon 5G market — you should weigh your options before diving in. But for just 400 bucks, the 10 5G totally doesn't suck. 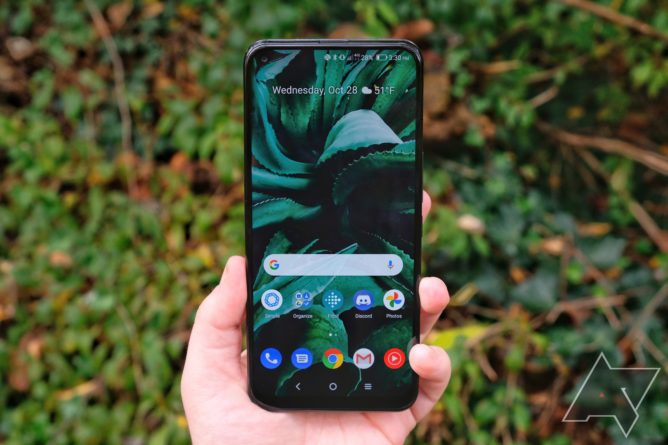 The TCL 10 5G is a pretty handsome device, all things considered. It's got a 6.53-inch, 19.5:9 display with bezels that are a little thick by 2020 standards — although not enough so to complain about for $399. What does merit some complaint is the quality of the screen. It's LCD, which isn't necessarily the worst thing, but looking at it from any angle but head-on distorts the color. There's also a shadow visible along the bottom bezel and around the display cutout. Also owing to being an LCD, there's no option for an always-on display.

Around back, there's a charming gemstone-like pattern with an iridescent rainbow glow visible in the right light. It's more subtle than it sounds — from most angles, especially indoors, the 10 5G looks bluish-black, but if you catch it just right, it gets a lot more interesting. It's a shame, though, that that pattern is covered by high-gloss Gorilla Glass 5 that gets grimy if you look at it the wrong way. It's also really slippery; I've had this phone slide off tables entirely on its own. 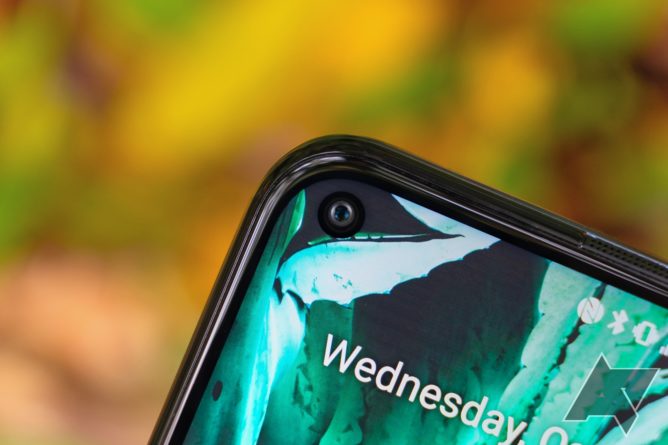 Nestled in a very comfortable position on the back panel is an old-fashioned capacitive fingerprint sensor that can open different apps depending on which finger you unlock the phone with — a novel feature, but one I didn't ever use after testing it.

There's a headphone jack up top, power and volume keys on the right edge, a combination SIM/MicroSD card tray on the left, and a USB-C port and single (bad) speaker on the bottom. I was pleasantly surprised by the phone's haptics; they're a lot tighter than I'd expect in such an affordable device.

You won't find any surprises in the box: the phone itself, paperwork, a SIM card tool, and a chintzy white USB-A-to-C cable and power brick.

TCL hasn't mucked with Android 10 too much on the 10 5G, and I commend the company for that. But the tweaks it did make are bizarre.

The status bar is positively crammed with space-wasting icons: an icon to let you know NFC is on; a horizontal battery indicator with a discrete numerical percentage; separate signal strength and network icons. The clock is also on the right side, despite the Android 10 default putting it on the left, and it shows an AM/PM indicator (unless you switch it to 24-hour). It doesn't really matter in any practical sense; the system will only show three notification icons anyway. But it sure is gnarly to look at. 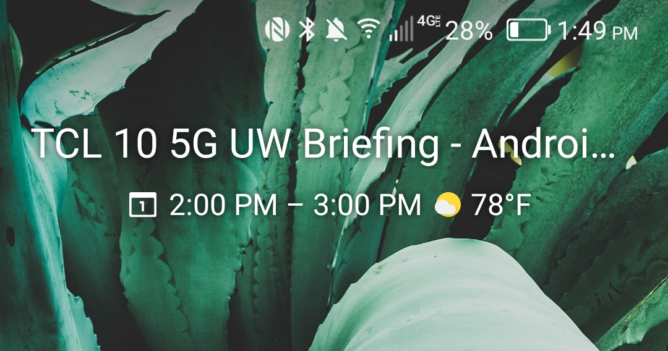 These status icons are out of control.

An update to Android 11 is in the works, which is heartening, but TCL couldn't tell me when it'll land. The 10 5G is also guaranteed quarterly security updates for "at least" two years — hardly ideal, but better than you'd expect for a $400 phone not made by Google, and even better than some high-end devices.

My biggest complaint about TCL's software is how navigation works. With gestures on, there's no home "pill" at the bottom of the screen the way there is in basically every other Android skin. That means content goes all the way to the bottom of the display with no padding. That includes the keyboard, so you'll need to retrain your muscle memory coming from any other gesture-based navigation setup. The keyboard's corner buttons are also cut off by the rounded corners of the display, and there's no button to close it — you have to swipe in from the side of the screen. It's really irritating. 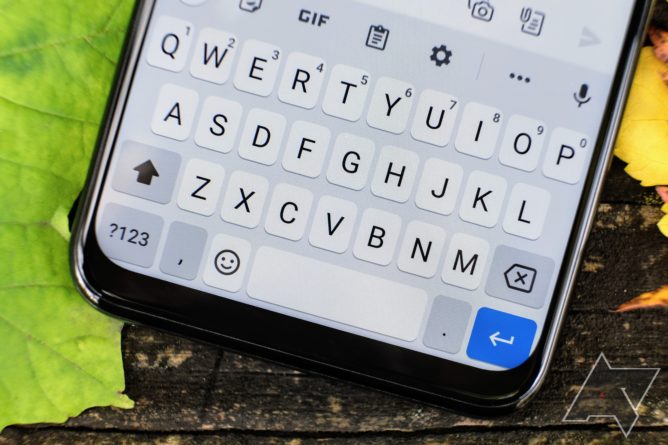 Get ready to hit the wrong row on the keyboard.

Also irritating: being a Verizon phone, this thing is absolutely stuffed with bloatware. More than two dozen non-essential apps come pre-installed (including two versions of Candy Crush). But at 128 gigs, the phone's got adequate storage, and most of the apps can be uninstalled or at least disabled.

Back on the sunny side, I'm floored at how competent lower-mid-range phones are getting. The Snapdragon 765G paired with six gigs of RAM — the same setup driving the Pixel 4a 5G, if you're keeping score — keeps the 10 5G humming along. As a professional phone nerd, I could absolutely use a phone that performs at this level full-time without getting frustrated, and that definitely bodes well for the casual audience TCL is courting with this device. That 765G chipset also means the phone is 5G-compatible on Verizon, including the carrier's still-basically-useless mmWave bands.

Battery life is fantastic, too. I was never actually able to drain the 10 5G's 4,500 milliamp-hour cell in a single day, but based on my time with it, I would guess it could easily clear eight hours of mixed-use screen time. It supports wired charging at up to 18 watts, and TCL tells me it can go from zero to 50 percent charge in about 35 minutes. 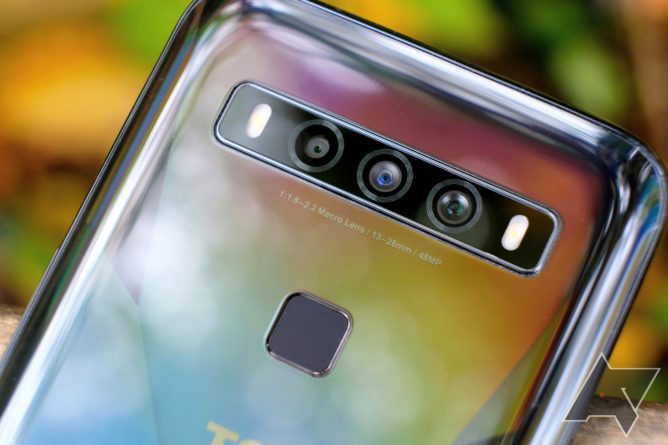 I don't know if it's fair to call the 10 5G's cameras bad considering the phone's price point, but they're definitely not great. There's a 48-megapixel standard shooter, an eight-megapixel wide-angle, and an extremely middling five-megapixel macro. Photos from all three tend to be pretty washed out and flavorless. But in some situations, the cameras go wild and really crank up the saturation:

It's a real shame no Android OEM aside from Google can seem to get imaging right at this price point, but if you want an honest-to-gosh good camera for under 500 bucks, you'll probably have to go for the the 5G-less Pixel 4a.

The shortcomings here in materials, photo processing, and software all make me feel the Pixel 4a 5G is very clearly a better buy at $500. If you keep an eye out, you can probably catch the Galaxy A71 on sale for that much, too. But if you sincerely don't care about the finer points — or you really want mmWave 5G and you can really only spend $400 —  the TCL 10 5G is a completely fine inexpensive phone. It performs very well, the battery is fantastic, and it's getting Android 11... someday.

Plus it gets really fast data on certain corners in select cities. 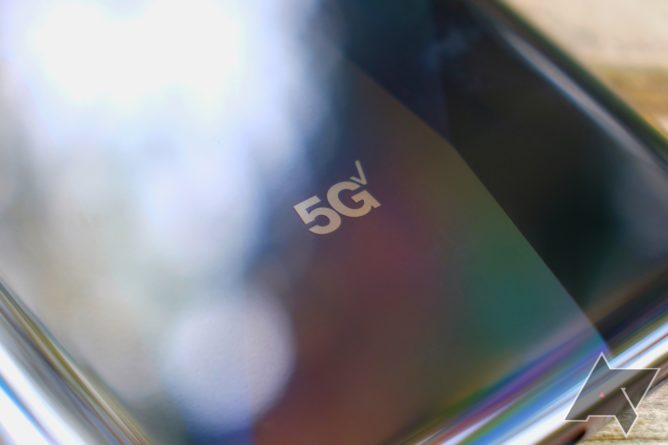 Chromecast with Google TV review, one month later: Buy this

Many websites will stop working on older Android versions in 2021