Google Photos is one of Android's most popular apps, but it was only a matter of time before Google started looking for ways to turn the storage hog into a money-making machine. A new teardown of Photos 5.18 reveals that Google is thinking about limiting certain editing features to Google One members, making a paid membership the only way to access them.

New strings inside the app include prompts like "Get extra editing features with a Google One membership" and "Unlock this feature and more with a Google One membership." What's more, it looks like some people are already running into this paywall in the wild. The Color Pop filter, which was previously available for everyone, seems to be part of a test limiting its usage to paid members. 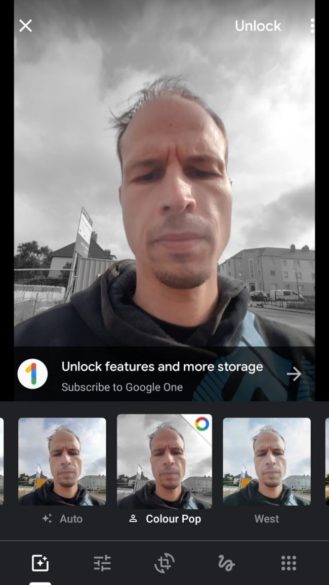 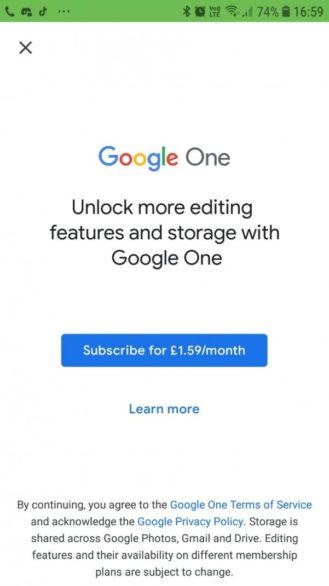 Filters like Color Pop are being tested as Google One exclusives.

It's unclear at this time exactly which features and/or filters will be placed behind the paywall. Version 5.18 of Google Photos also includes mentions of new photo processing options including Dynamic, HDR, and Vivid, as well as new filters that might let users adjust the look of the sky with Afterglow, Airy, Ember, Luminous, Radiant, and Stormy options. Hopefully if Google does end up rolling out paid features more widely, they'll be new ones rather than ones that were previously free.

We saw the launch of a new photo print subscription last month, and Google been working on ways to make Google One memberships more attractive to consumers, such as offering a free VPN service. Google currently lets users store unlimited high-quality photos and videos in the cloud, so it makes sense that the company is trying to find ways to help offset the costs. Let's just hope that it can afford to continue keeping the essential cloud storage aspects of Photos free for those who rely on it.

Google Photos 5.18 is available now on APK Mirror, or you can wait to update through the Play Store.

Google told Engadget in a statement that only an upgraded version of color pop will require a Google One subscription, not the existing functionality that is already available. "In Google Photos, color pop is a feature that continues to be available for anyone to use, at no cost, for photos with depth information (such as portrait mode)," the spokesperson said. "As a part of an ongoing rollout that began earlier this year, Google One members can apply the feature to even more photos of people, including those without depth information."

Many websites will stop working on older Android versions in 2021