In cooperation with ArtPlay Games, NetEase just announced that it will bring the popular Metroidvania title Bloodstained: Ritual of the Night to Android and iOS, and the game will be released worldwide as a premium title, just like on consoles and PC. Bloodstained was created by Koji Igarashi, the producer behind some of the more popular Castlevania titles such as Harmony of Dissonance. This is why the 2019 release for Bloodstained was hotly anticipated, which is why I'm sure more than a few people will be excited to see how the game stacks up on mobile.

Above, you can watch the original story trailer for Bloodstained: Ritual of the Night, and while this isn't an Android-specific video, it provides a solid look at what the game will offer on mobile. As you can see, this is a Metroidvania title, which means it's an exploration-focused platformer that should feel familiar to Castlevania and Metroid fans alike.

Since NetEase just announced this mobile port, details are still light. We don't know when the game will launch on Android or how much it will cost. What we do know is that NetEase is targeting a worldwide release on Android and iOS and that the game will be available at a single price-point. We also know that a redesigned UI is in the works, along with a new achievement system.

Frankly, I'm a little surprised that NetEase announced that it's going to bring Bloodstained: Ritual of the Night to mobile, especially since the Nintendo Switch port still suffers from performance issues, even after a slew of updates, and that's a device with active cooling. How the game will perform on mobile, a platform where the majority of devices are passively cooled, is anyone's guess. Let's just say I'm a little trepidatious to see how NetEase handles the port. Of course, it's still exciting to hear that a quality Metroidvania title is coming to the platform soon. Let's just hope things turn out better than they did on the Switch.

Bloodstained: Ritual of the Night announced for iOS and Android

Guangzhou, China, 26. October 2020 – Today, NetEase Games and ArtPlay are delighted to announce that they are co-developing the mobile version of the critically acclaimed action roleplaying adventure (ARPG), Bloodstained: Ritual of the Night. The game will launch globally by NetEase Games as a premium title on iOS and Android.

Bloodstained: Ritual of the Night for iOS and Android features all the action, gameplay and content of its console forebear with no compromises on visual quality or gameplay fidelity.

Additionally, NetEase Games and ArtPlay have taken the opportunity to implement new features and improvements unique to the mobile version. The UI and the 108 different shard icons have been fully redesigned to give players the best possible experience. Weapons and combos have also been adapted to let players customize their fighting style to suit their play style, even without a controller. Finally, the mobile version includes all console DLC which makes this release the definitive edition of the game - for playing on the go.

Featuring over 120 unique mobs and bosses to vanquish and a giant Gothic castle to explore bursting with challenges and surprises, Bloodstained: Ritual of the Night for iOS and Android is sure to be a must-buy for any mobile RPG fan.

For more information about this exciting collaboration visit Bloodstained: Ritual of the Night on Facebook: https://www.facebook.com/Bloodstainedrm/

The latest information about NetEase Games can always be found on the official Facebook page: https://www.facebook.com/NetEaseOfficial/

Bloodstained: Ritual of the Night arrives on the Play Store for pre-registration 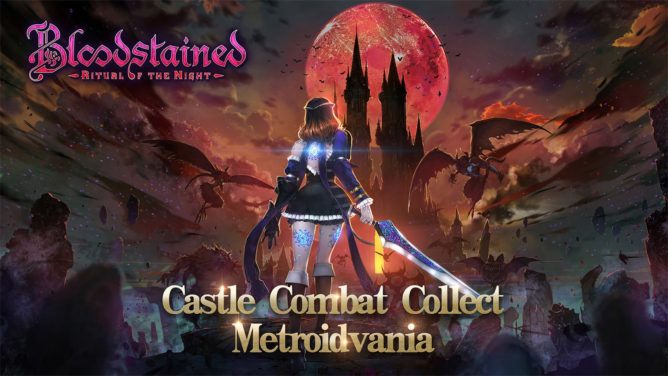 Last week we learned that NetEase would be bringing the indie Metroidvania title Bloodstained: Ritual of the Night to Android, but for some reason, the studio waited until this week to list the game on the Google Play Store and Apple App Store. But now that the Android listing is live, everyone is free to pre-register in order to receive a notification on the day the game is released. It's also worth noting that the Apple App Store listing also arrived today, and if you check out the page, you'll see that the expected iOS release date is December 4th. While iOS and Android release dates can differ, NetEase has confirmed in a press release that the game will be launched on both platforms this December for $9.99, so the iOS release date appears to be correct. Pre-Registration for Bloodstained: Ritual of the Night on iOS and Android Now Open

Guangzhou, China, 6. November 2020 – NetEase Games and ArtPlay are pleased to announce that players are now able to pre-register for the mobile version of the critically acclaimed action roleplaying adventure Bloodstained: Ritual of the Night. Both iOS and Android versions of the game will be priced at $9.99 USD.

Pre-registration is available in North America, Europe, Japan, Korea, SEA and South America via https://apps.apple.com/app/id1527064732 for iOS and https://play.google.com/store/apps/details?id=com.netease.bloodstained for Android.

Bloodstained: Ritual of the Night for iOS and Android features all the action, gameplay and content of its console forebear with no compromises on visual quality or gameplay fidelity. In addition to an overhauled UI and redesigned shard icons, the mobile version includes all console DLC which makes this release the definitive edition of the game - for playing on the go.

Featuring over 120 unique mobs and bosses, all with special abilities for players to gain when vanquished, await in the vast Gothic castle with its countless challenges and surprises. The 107 weapons and 23 weapon skills have also been adapted to let players customize their fighting style, even without a controller.

Bloodstained: Ritual of the Night features a 2D-map, that has been perfectly adapted to be explored on mobile devices, as well as the familiar shard-buff-system from the console- and PC-version. Another highlight that will make fans feel right at home are the Gothic music and original voice actors from the game, like Ami Koshimizu (Miriam) and Shusaku Shirakawa (Gebel). In the future, the mobile version of Bloodstained: Ritual of the Night will get a new playable character, a boss rush mode, a speedrun mode and much more.

For more information about this exciting collaboration visit Bloodstained: Ritual of the Night on official website and social media channels.

The latest information about NetEase Games can always be found on the official Facebook page: https://www.facebook.com/NetEaseOfficial/

ABOUT NETEASE GAMES
NetEase Games is the online games division of NetEase, Inc. (NASDAQ: NTES; HKEX: 9999), developing and operating some of the most popular PC-client and mobile games in markets including China and Japan. As one of the world's largest incubators of quality online game content, NetEase Games is dedicated to supporting the growth of innovative studios around the globe and growing an international presence along the way. To complement its self-developed games and world-class R&D capabilities, NetEase Games also partners with other industry leaders including Blizzard Entertainment, Mojang AB (a Microsoft subsidiary) and other global game developers to operate some of the most popular international online games in China. For more information, please visit neteasegames.com.

ABOUT ARTPLAY
ArtPlay is a Japanese console and mobile game developer. The company was founded in 2014 by Koji Igarashi, the renowned Castlevania series producer and Feng Gang. Their first console / PC title - Bloodstained: Ritual of the Night acquired 5.50 million USD through the US crowdfunding platform Kickstarter, which was a record amount for crowdfunded games at that time. ArtPlay is committed to becoming the world's top game production company, creating high-quality games for global users.

** PC and console version of Bloodstained: Ritual of the Night was published by 505 Games S.p.A.