Telegram and Signal have had disappearing messages for a long time, and even Facebook's own Messenger lets you set delete timers on messages in secrets chats. Now WhatsApp has announced that it's joining its competitors — ephemeral messages are rolling out to the stable version of WhatsApp today.

In contrast to Telegram and Messenger, you won't need to start a secret chat to activate disappearing messages. Once the feature rolls out to you, both parties will be able to activate it for one-to-one chats while admins can tweak it in groups. There's only the option to make messages disappear after seven days, a time frame you can't tweak. WhatsApp explains some of the details in an FAQ post. 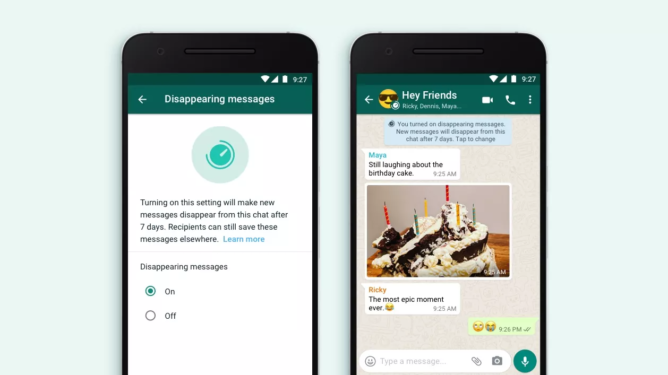 The company is pitching disappearing messages as a way to make chats feel more like real-world interactions, not as a Snapchat clone. Its goal is to "make conversations on WhatsApp feel as close to in-person as possible, which means they shouldn't have to stick around forever." It explains how the self-destruct timer will help with that: "When disappearing messages is turned on, new messages sent to a chat will disappear after 7 days, helping the conversation feel lighter and more private." Of course, recipients can still take screenshots or save messages elsewhere, so it's not a bullet-proof solution.

Ephemeral messages have been in testing for about a year now. Back when the experiment first started, there were options to make messages disappear within five seconds or one hour after reading, but it looks like WhatsApp decided that seven days is the sweet spot for most people.

You can download the latest version of WhatsApp from the Play Store or over at APK Mirror, but keep in mind that disappearing messages are coming via a server-side update — you'll have to be patient and wait until it reaches you. WhatsApp says that the rollout should be finished by the end of November.