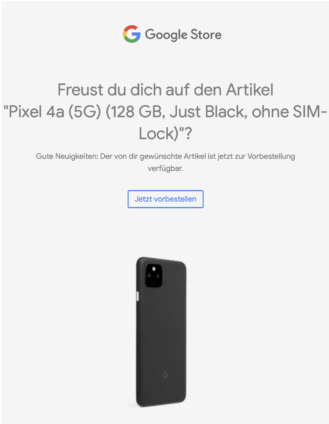 Notification for the German 4a 5G.

In case you missed it, we were pretty wowed by the Pixel 4a 5G, which easily beats the Pixel 5 on value while offering a similar experience with a bigger display. That means you get the same Snapdragon 765G chipset and the new wide-angle camera, though you give up on the slight RAM bump, 90Hz display, and features like an IP rating, wireless charging, and metal build. It's up to you if those benefits are worth an extra $200.

There are actually two versions of the Pixel 4a 5G: A mmWave 5G Verizon model and a cheaper version that makes do with (more useful) sub-6GHz 5G. As far as we know, that mmWave 4a 5g is US exclusive, so folks in this new wave of countries will be purchasing the sub-6 version.

Now that pre-orders have opened in this last wave of countries, Google has met the full regional availability it promised at launch. Pre-orders are set to ship by November 19th here in the US, while some of these new countries have ship dates as far out as November 26-30th, which may also vary by market. Either way, there's still a wait ahead of us.