According to a support document that was recently published (h/t @OriginalPenguin), Google is planning to offer One subscribers an extended three-month trial for Stadia Pro, matching offers that come with some Chromebooks and the new Pixel phones. This even applies to folks that took advantage of previous trials or who canceled a Stadia Pro membership, according to the published terms, though the promotion doesn't seem to be live just yet.

In case you're unfamiliar, Staida is Google's game-streaming service and though it faced a lot of criticism, it actually works pretty okay. Perhaps more importantly, it's also a whole lot cheaper than other next-gen gaming options, and you don't have to wait around on hardware. The biggest concern is the quality of your internet connection. It's not available everywhere, and the service needs plenty of throughput and a good ping to work well. It also works on plenty of platforms — excluding Google's own Android TV, for some inane reason. 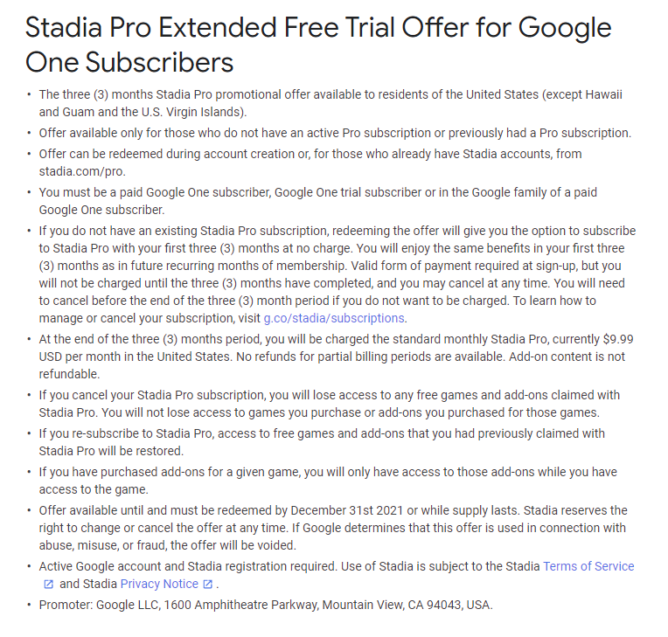 Promotion details, in case Google takes the page down or something.

According to the document, the new extended free trial will be available to paid Google One subscribers that are US residents who do not currently have Stadia Pro or who previously had a subscription. The promotion will be available until December 31st, 2021.

We've reached out to Google for more information regarding this promotion's availability since we can't find a way to redeem it just yet, but a response wasn't immediately forthcoming. We have to assume it will be live soon.