Google Meet's utility in this work-from-home era can't be overstated, especially for G Suite and Google Workspace users, but the knock system for allowing folks inside your meeting can be a hiccup to the otherwise smooth experience. Having to manually approve or deny entry is easy if it's just one or two people, but with a big group, it can become tedious. But Google is adding the ability to blanket accept all pending knocks for bulk admittance. 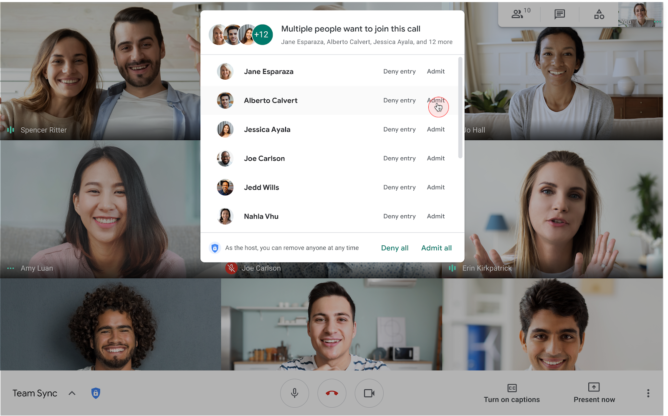 Ignore the red circle around the cursor, not sure why Google's highlighting single-person entry here.

I'll admit, I'm usually "that guy" who won't change domains before jumping into our work meetings, so I'm often stuck (alone) in the knock queue, waiting for the host to admit me. But we're a pretty small organization, and issues like can and do scale. Furthermore, some meetings require manual approval for entry anyway. There are plenty of reasons you might need to just open the floodgates and let everyone in, and Meet has decided it's time to save you a few clicks. 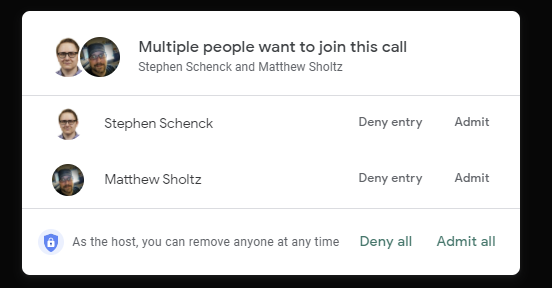 The feature will manifest for the meeting organizer simply at the bottom of the prompt to allow participants to join the call, with a big, easy "admit all" button. I would have assumed Meet would already have a feature like this, but Google claims it is new, and the corresponding section of Google's support documents didn't mention it just a few weeks ago.

Admit everyone. What do you mean "everyone?"

The new bulk admit all feature should hit most Google Workspace customers by the end of November, rolling out in a 15-day stagger for Rapid Release domains starting November 4th and Scheduled Release domains on November 16th, though it could take slightly longer to hit everyone. In testing, it already appears to be live for us.

Which phone should Pixel 2 owners buy next?