As the Pixel 5 starts to make its way into customers' hands, we've received several reports of a gap between the screen's plastic bumper and the bioresin-coated aluminum frame of the phone. Reports vary, but the area around the front-facing camera appears to be a hotspot for the problem. Although customers were concerned this gap could affect the phone's IP-rated water resistance, a representative on Google's support forums claims its 'a normal part of the design' and has no impact on water and dust resistance or functionality. The volume of reports isn't especially large by itself, but we have to assume the limited number of Pixel 5 units in the wild has something to do with that, and the number of new reports is increasing at a consistent rate. Complaints have picked up over the last couple weeks at Pixel Phone product forum and XDA Forum, with plenty of photos showing off not just the gap itself, but how much it can vary in location and prominence between units. 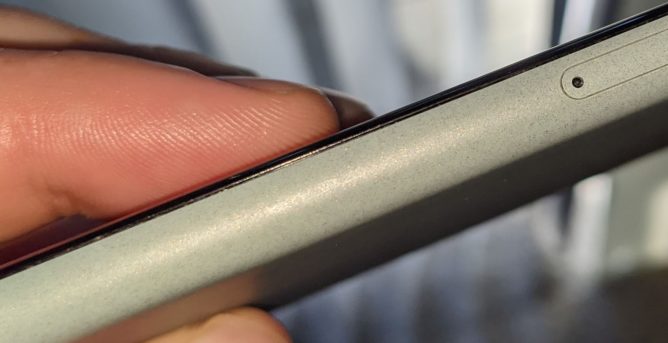 AP's Pixel 5 is only slightly affected, many other devices have it worse.

We can confirm that our own Pixel 5 review unit is also affected, though to a lesser degree than some of those pictured above. Most reports show it in the corner closest to the display's camera cutout, along the top of the phone, and above the SIM tray on the left side, but it may also appear in other areas as well. Though most images demonstrate the problem in the Just Black colorway (probably because it's most visible with the stronger contrast), it also affects the Sage Green color. Based on reports, these gaps are present from the start, so the screen doesn't appear to be separating over time.

We didn't originally know if this gap would have an effect on the phone's IP rating, but a representative took to the product forums yesterday, explaining that this gap is normal and won't impact water or dust ingress protection. The full explanation provided is just below:

We’ve had a chance to investigate units from customers and, combined with our quality control data from the factory, we can confirm that the variation in the clearance between the body and the display is a normal part of the design of your Pixel 5. There is no effect on the water and dust resistance or functionality of your phone. We will work with customers on an individual basis to address any concerns they may have.

While the issue might be a little unsightly for those with an eye to such details, at least affected devices don't suffer any non-aesthetic harm from the gap, and most cases with a lip around the display should easily hide it.