I was hoping there might be a fix for 60/90Hz flickering at certain brightness levels I observed on my Pixel 5, but it doesn't appear to have made the cut. The full functional patch notes are just below: 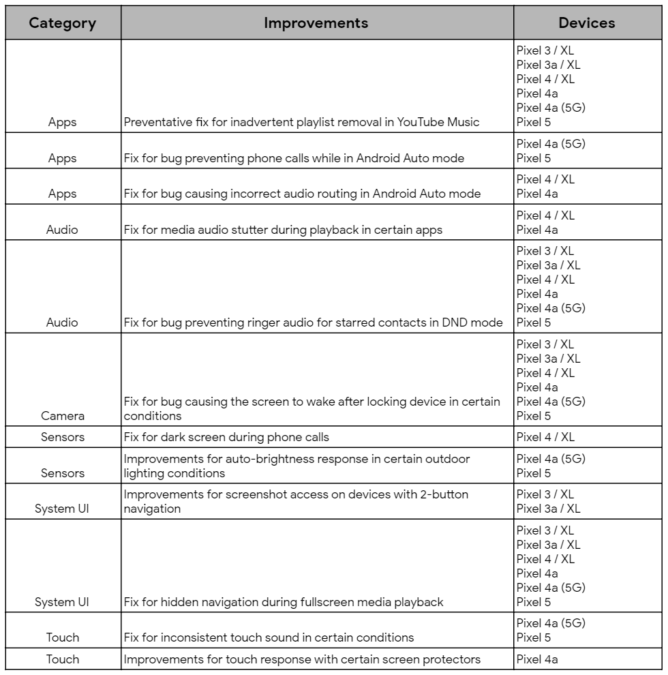 While some of the fixes target more recent Pixels, several bugfixes are also included for the Pixel 3, 3a, and 4 series, including a fix for screenshots on the 3 and 3a and a fix for a dark screen during phone calls on the Pixel 4 series, among other changes.

As Google previously told us to expect, there's no update this month for the Pixel 2 series. Instead, we'll be getting one last bug fixing roundup update for the Pixel 2 and 2 XL in December, as both phones have reached end of life — gone before their time.

Update bulletins for November 2020 have also been published. Though the number and severity of vulnerabilities patched this month are slightly lower than usual, there are still numerous high and critical-level patches, and it's still in your best security interests to install the update once it's available. We should note, November patches are already rolling out to some Samsung devices.

Factory and OTA images are available for download now, if you need them. Curiously, Google also published a pile of updated carrier-specific October images for the Pixel 4a 5G and Pixel 5 at the same time, and which weren't available when the images were first published last month. There are carrier-specific variants for folks in the EU, Australia, and Japan, as well as Verizon-specific October images, so make sure you're fleshing the right ones if you install them manually. You may simply be better off waiting for the update to roll out in the normal fashion, which should be happening shortly, though note: Verizon images for the Pixel 4a 5g and 5 won't be available until next week.

Google gives more prominence to vibration settings on the Pixel 5