Facebook long introduced dark themes for Instagram, WhatsApp, the Messenger, even Facebook Lite and its website, but so far, its main mobile app hasn't received an official gray-and-black coat of paint. After a year of appearing and disappearing a/b tests, it seems like the company is now almost ready to fully launch the theme. In cooperation with renowned app sleuth Jane Manchun Wong, Facebook has announced that it's now publicly testing dark mode.

That means that on the surface, everything remains as it was: Facebook will continue a/b testing its dark mode with select random people, just like it has been for the last few months. But it's still good to hear at least something resembling any kind of progress. The company has been testing a pretty complete looking dark theme since November 2019, so we've been expecting it to roll it out to everyone sooner rather than later.

You asked it, I chatted with Facebook’s @alexvoica about it and here’s a video made in collaboration with Facebook! pic.twitter.com/TGjdTXDxoP

The promo video Facebook released in cooperation with Jane Manchun Wong reveals a sleek new look that isn't too different from the design we've been seeing since January. The app trades its white background for dark gray and inverts its black letters and icons. Only the currently active tab retains the trademark blue Facebook color, and unread notifications will still be signified by a red dot with a number in it. All in all, Facebook's dark mode doesn't look special compared to any other app's, so I wonder why it took the company so long. 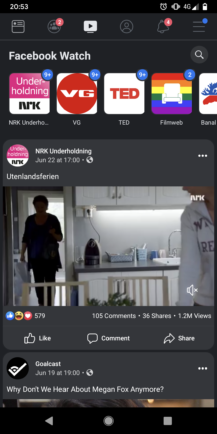 It looks like Facebook's word of commitment and the sleek new promo video is all we get for now. Let's hope that the company moves quickly and rolls out dark mode for everyone soon.

Samsung showcases One UI 3.0 design ahead of final release