Phones have gotten boring in the last few years, but things are getting weird again, and thank goodness. I have been doing this long enough to remember the last time phones got weird—I've reviewed phones with spring-loaded keyboards, tablet docks, curved bodies, and all manner of multi-screen configurations. After settling on the flat glass slab form factor, OEMs are finally starting to take more risks. No phone better exemplifies this trend than the LG Wing. While LG has been pushing dual-screen accessories for a while, the Wing is the first modern LG phone that integrates a second screen in the handset. The configuration is, well... it swivels.

Behind the swiveling screen, the Wing is a fairly typical phone with upper-mid-range specs, a pop-up camera, and a price tag that's borderline crazy. LG wants $1,000 for the Wing, even though the specs are no better than phones that cost $600-700. It's really banking on that swiveling screen convincing users to drop the cash, but it's just not well-executed. The swivel makes the phone far too bulky, the usefulness of the form factor is questionable at best, and the device is light on the premium features you'd expect for a grand.

Even if you'd never seen the LG Wing before, you would instantly realize something was amiss when you picked it up. This phone is heavy and clunky in a way that most modern phones are not. It clocks in at 260 grams, only about 20 short of the Galaxy Z Fold2, which is a real chunk of a phone. The Wing is also more than a centimeter thick. Interestingly, that might be the only thing you notice at first because the swiveling screen feels solid when it's closed. I've handed the Wing to a few people, and none of them have realized the screen moves until I told them. However, in extended use, I've found a few areas of the screen that move a bit when pressed, revealing the mobile nature of the panel. As I pointed out above, this phone is almost as heavy as the Z Fold2, and too much of that weight is concentrated around the swivel, which makes it top-heavy and not very comfortable to hold for extended periods. 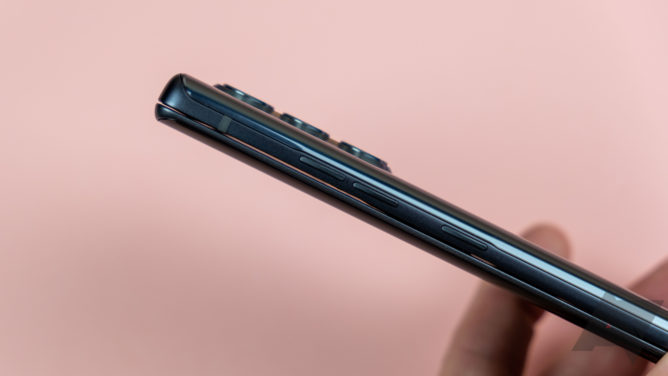 Note the gap between the swiveling screen and the rest of the phone.

The body of the phone is typical of a 2020 smartphone with glossy glass on the back and a metal frame. The camera module sticks up on the back, but not as much as on most phones. The buttons on the right edge are reasonably sturdy and tactile, and there's a pop-up selfie camera module on the top. The bottom plays host to the USB-C port, and that's it. Notice something missing? Yes, LG was unable to cram a headphone jack into this phone. 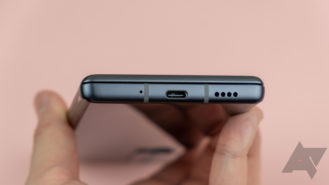 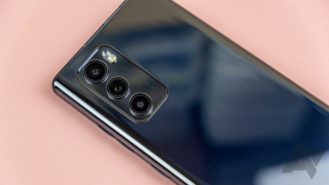 Let's cut to the chase: what's the swivel mechanism like? It's actually pretty neat as a piece of engineering. The pivot is about a third of the way down from the top of the phone, allowing you to nudge the bottom clockwise to flip the device open (it's awkward to do with your left hand, though). The mechanism is spring-loaded, and there's a satisfying click as it reaches the end of the swing. It's no Samsung folding hinge, but it's still impressive. Unfortunately, the end result of opening the LG Wing is this bizarre T-shaped screen layout. There's also a gap between the swivel display and the body of the phone, which doesn't bode well for the build quality or tolerances. 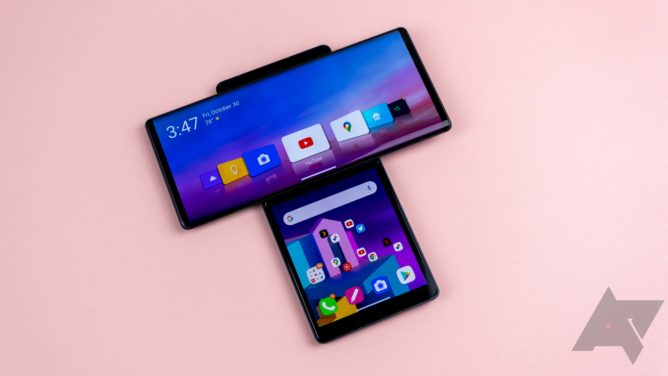 The primary OLED (the one that rotates) measures 6.8-inches and has a 1080p resolution. That's a bit low when we're talking about a phone this large, but it still looks good enough if you're not going to scrutinize it next to a higher-resolution device. Outdoor brightness is acceptable but not incredible. Contrast and saturation seem on-point, though. There's an in-display optical fingerprint reader in this panel, which is middle-of-the-road for speed and accuracy. The bigger issue is that if you flip open the Wing without first unlocking, your fingerprint sensor is in a very inconvenient place. The square-ish secondary screen is visible at the bottom of the device when the main screen is flipped out, and it's a bit sharper (1080 x 1240 at just 3.9-inches).

The Wing comes with a 25W wall charger, a 3-foot USB C-to-C cable, and a USB-C to 3.5mm adapter. I'm happy to see LG include this accessory as many device makers have dropped it even when devices lack a headphone jack.

The LG Wing runs Android 10 (which is more than a year old now) with the usual assortment of LG software and design changes. LG's take on Android is probably my least favorite among the major Android OEMs. It's just a strange mix of UI elements borrowed from Samsung and Apple, and the results are often confusing and disjointed. I am, however, pleased that LG has at least stopped trying to make its own left-most info panel on the home screen. You get Google Discover integration, and the "stretch" animation when you hit the end of the home screen panels isn't as ugly as it used to be.

You might recall we complained about needing to manage two different home screen layouts on the Z Fold2. Well, LG has one-upped Samsung with three home screens you need to manage on the Wing. When the phone is closed, you have the standard Android home screen UI. When you flip the Wing open, there are two more home screens, neither of which connect to the "main" one. On the top landscape screen, you have a rotating carousel interface of app shortcuts called "Swivel Home." You can change the apps included in Swivel Home, but it's a really poor use of space. The second display on the bottom has its own traditional (but small) home screen where you can add apps, widgets, and multi-app shortcuts that launch apps on both screens at the same time. 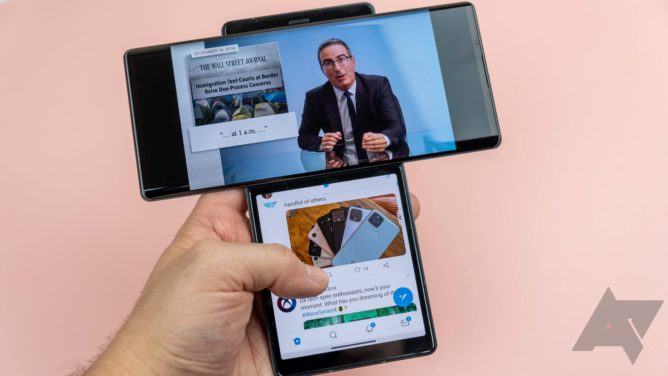 Watching video while mindlessly scrolling through another app is one of the few good use cases for the Wing.

The multi-app shortcuts are the only thing making the swivel display even marginally useful for me. It's similar to the app pairs on the Z Fold2, but less powerful and rather hidden in the settings. I've created a few shortcuts that can open a video app on the top display and something like Chrome or Twitter on the bottom. Maybe if you've got a short attention span, this would be a valuable experience. If you ask me, video is the only thing that makes sense on a landscape 20.5:9 ratio display. You can turn the phone sideways (I know, this is confusing) to make the primary display render in portrait mode, but it's incredibly awkward to hold the phone like this.

Meanwhile, on that second screen, many apps have trouble rendering due to the unusual size and shape. The Wing won't even show apps in the second screen app drawer that are not optimized for the form factor. You can manually enable second screen support on apps in the settings; it's annoying, but at least you can do it. There are other compatibility issues as well, most notably with the keyboard. When the swivel is open, LG's keyboard always appears on the second screen, allowing you to enter text on the top display. After switching to Gboard, the keyboard pops up on the top display in landscape mode, which makes it pretty much unusable.

The Wing is internally not much different than the recently launched LG Velvet with its Snapdragon 765G chipset. The 765 is a perfectly capable chip in most phones, but I do feel like LG's optimization leaves something to be desired. The Wing usually clips along at a decent pace, opening apps and loading webpages without any notable slowdowns. However, sometimes an app just lags for no discernable reason. Swiveling the screen also takes a beat too long to register on the phone, and the aforementioned performance hitches seem more common when running in dual-display mode. It's possible the 765 just wasn't the right choice for this multi-screen experience.

A 4,000mAh battery is perhaps a bit on the small side for a phone with two displays, but they're both 60Hz. Without a higher refresh rate, the Wing doesn't hammer the battery like the latest Samsung and OnePlus phones that top out at 120Hz. I had no trouble making it through the day with the Wing, even lots of watching video on that swivel display while I attempted to poke around in other apps on the teeny-tiny secondary screen. It's hard to estimate how much screen time you'll get with the Wing because it varies so much based on how often you have both screens active. That said, I didn't experience any range anxiety using it.

The LG Wing has what I would consider a certifiably weird camera set up to go with its weird... um, everything else. There's a primary 64MP shooter with OIS along with a pair of ultrawide camera modules. One of them is your traditional ultrawide lens for still photos, but the other is exclusively for LG's software gimbal mode. 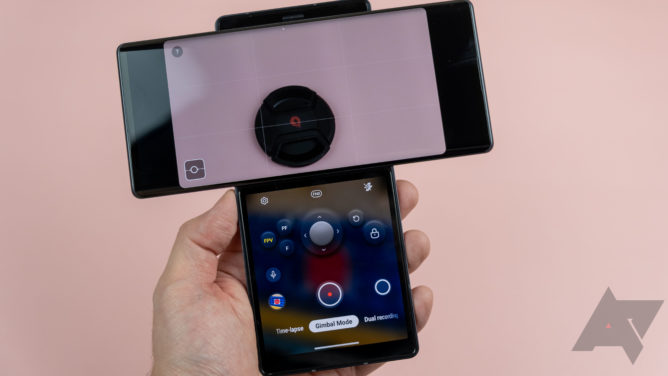 When you launch the camera with the swivel open, you get an interface designed entirely around video recording. The second screen has controls, including a gimbal thumbstick, and the swivel display acts as the viewfinder. The phone uses the wide field of view of the ultrawide camera to create a gimbal-like experience with multiple panning modes, view locking, and a dual recording mode that uses both the front and rear camera. However, this mode is limited to 1080p video, and it doesn't look good unless you're in bright outdoor light. But hey, I'll admit it's fun to play with. Regular photos on the LG Wing are what we've come to expect from LG. It favors longer exposures over sharpness, which makes it hard to photograph a moving subject indoors. However, the processing looks sharper than what you get from Samsung, but the colors don't pop as much. LG also has some entertaining camera modes like AR effects, YouTube Live integration, and a respectable portrait mode. However, I don't think this camera array makes sense on a $1,000 phone. I'd really like to see a solid telephoto module for that kind of money.

No, but I will admit I had fun using the Wing. I've seen a wide range of reactions when I show people the phone—some laugh, some look at me like I have lobsters crawling out of my ears, and others seem genuinely interested in this weirdo phone.

The Wing is a slice of retro-futurism; it would have seemed impressively futuristic to someone 20 years ago. Today, we know it's just a gimmick, and unfortunately, it doesn't solve any problems with current smartphones. The dual-screen setup is too limited to be useful in most situations, and the phone is heavy and awkward. The Wing does a handful of cool things, but none of them are sufficiently valuable to pay $1,000 and haul this chonk of a phone around in your pocket. 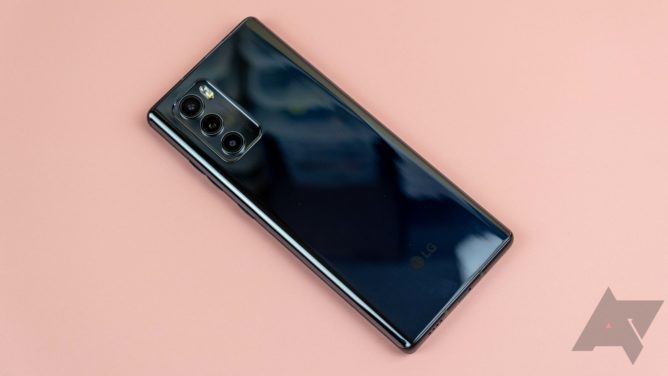 So, no, most people should not buy the LG Wing. I wish I didn't have to say that because weird phones can move the industry forward. The original Galaxy Note seemed like a crazy idea at first, but now it's one of Samsung's most popular products. The Wing won't be the same for LG, but I hope they keep experimenting.

Weekend poll: How often do you use the Google Assistant's 'Snapshot' feature?