YouTube Music and YouTube are too interlinked for many people's tastes, and it appears that Google is finally taking more steps to decouple the services. The YouTube Music app has widely rolled out a (previously spotted) option that lets you hide liked music videos from YouTube (as noticed on Reddit). Unfortunately, the setting doesn't apply to liked songs in the video streaming service, and recommendations and the watch history are still sometimes bleeding over from one platform to the other.

When you head to music.youtube.com or the YTM app on your phone and open the settings from the account menu in the top right corner of the interface, you're greeted by a new option: Show your liked music from YouTube. The toggle is turned on by default, so if you don't want your liked YouTube music videos to show up in YTM, you have to switch it off manually. Once that's done, you should notice that videos you liked on YouTube no longer appear in YTM. That's particularly great for some videos that YouTube erroneously recognizes as music. 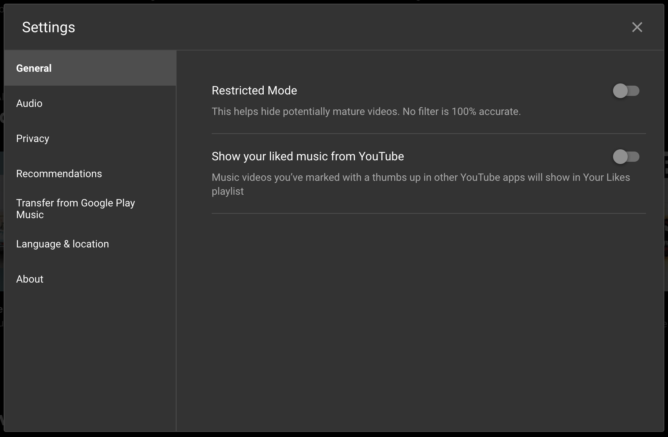 Unfortunately, there isn't a corresponding setting in YouTube itself, so liked YTM songs still appear on the video platform. On a related note, I'm annoyed that song recommendations are still bleeding over from YTM to my YouTube homepage. And sometimes the music history will also appear in YouTube, particularly when you ask Google Assistant to start a playlist on your TV or use the YouTube Music Android TV app (which is just a glorified shortcut to the regular YouTube application, so that's no surprise). These are two more problems the developers should tackle to separate the two services.

You can download the latest YouTube Music release for Android from the Play Store or over at APK Mirror, but it looks like the new option is coming as a server-side switch that should be available on any recent version of the app.