While not historically speedy with major software updates, Samsung has been really good about issuing security patches lately. October isn't even over yet, and the company is already rolling out the November security patch, starting with the Galaxy Z Fold2.

With a build number of F916BXXU1BTJB, the update is available now on select models of Samsung's latest foldable flagship. The rollout seems to have begun with the SM-F916B international variant, but should expand to devices in the US soon. The file size isn't large, coming in under 350MB 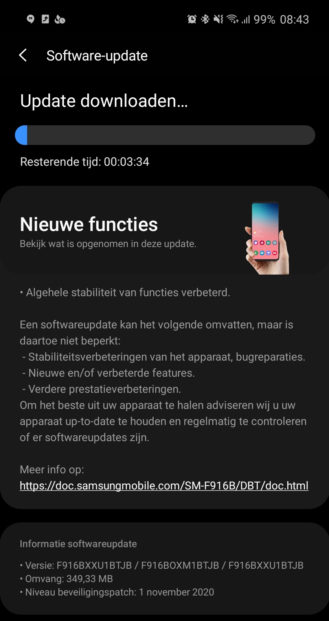 The OTA update brings the phone the newest November security patches, along with some general bugfixes.

This is the first Samsung device to receive the November security patch. Not even Google has rolled it out yet, which makes sense because it's not November yet. Maybe Samsung just hates Halloween and decided to pretend that it's already November? If you haven't received the new build yet, just sit tight and twiddle your thumbs until your phone gets an update notification.

Quibi will fully shut down on December 1