If the name Maple Media doesn't ring a bell, it might be time to put the Californian company on your watchlist. Over the past few years, the startup has purchased many popular Indie Android apps like the podcast player Player FM, the photo collage maker Pic Stitch, and a whole bunch of games.

According to a TechCrunch investigation, the company's goal is to optimize existing IAP revenue streams and add its advertising network to its purchases, all while optimizing the apps thanks to shared code and developer expertise across the lineup. It looks like the latest product to become part of Maple Media's portfolio is Klinker Apps' PulseSMS, a Pushbullet competitor focused on cross-platform text message synchronization.

If Maple Media's business practices seem familiar, it's because they are. Cheetah Mobile followed a similar strategy, buying out successful apps and turning them into data-collecting, IAP-infested cash machines. The company also didn't shy away from a click fraud scheme, though it's unclear if that happened on purpose or not. Ultimately, Google banned the studio from the Play Store.

With Maple Media, it remains to be seen how the studio will behave in the long term, but current evidence doesn't look good. At the moment, we see disgruntled reports of intrusive and disruptive ads and performance issues that go against the business's optimization promises. Long-time Player FM users are particularly vocal about the problems, and the same is true for some Pic Stitch users. 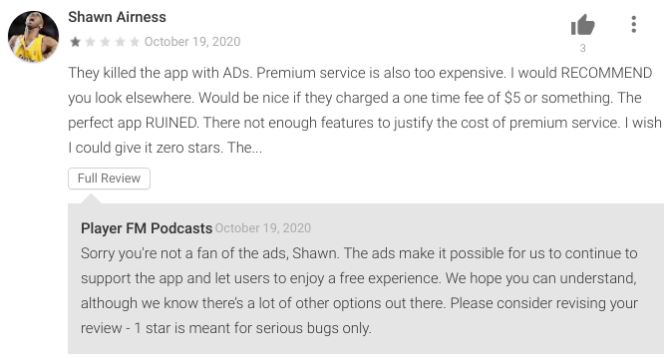 One of many Player FM ratings.

Neither Pulse SMS developer Klinker Apps nor Maple Media publicly disclosed the details of the sale until now, but the evidence is mounting. The Pulse SMS web client Github project is now hosted by Maple Media, and a Redditor spotted a recent change on the Klinker Apps website that actively discloses an unspecified Pulse SMS sale: "We built, designed, then sold one of the top SMS apps on Android." It's also fitting that the Klinker Apps Play Store listing has removed all other apps and has been renamed to Pulse SMS, which is now the only app it offers. 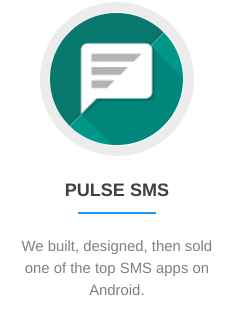 Update: We received a statement clarifying that only Pulse SMS has been sold and that a formal announcement is forthcoming.

It also remains to be seen what the change means for the free and open-source nature of the Pulse SMS app. It's possible that the Android application remains as it is, but the new owner could decide to make the cloud syncing feature more expensive or add advertisements to the web interface, though the latter seems unlikely — syncing already is a premium feature, after all. I also wouldn't be surprised if lifetime subscribers were in for a change, as they don't contribute any recurring funds.

Only time will tell what the sale does to Pulse SMS in the long term. With the experience with Cheetah Mobile and Player FM in mind, you might fear for the worst, and we'll be sure to keep a close eye on the development going forward.

Luke Klinker reached out with a statement in the comments below. You can read it right here or by scrolling down just a little bit:

There hasn't been a statement made because the transfer is still finalizing. I suppose that this reply will do for a statement, though.

I sold the app because I just haven't been able to give Pulse the time it needed to flourish, as my priorities have simply changed over the past year. Maple Media has told me that there are no plans to put ads in the application and that the focus will be on growth through feature development: exactly as I have managed the app.

Probably would have been better to reach out to me before posting this article, honestly. Not every business purchase is malicious, which appears to be the conclusion that this article is trying to reach. Pulse found a great new home and I have every confidence that they can and will give the app the time and love it needs to continue to grow. If I didn't have that confidence, then I wouldn't have sold the app. I am very proud of what I built, I would not just give it to anyone.

It also seems prudent to remind everyone that your messages, conversations, contacts, etc in Pulse are end-to-end encrypted. The only way to access them is through your account's password. No one can decrypt them, including myself and Maple Media: https://messenger.klinkerapps.com/encryption.html

Talon for Twitter is still available on the Play Store and was not part of the purchase.