Most 360 camera aficionados know that Insta360 is one of the top players in the game. After a shy start, the company made some great cams, starting with the One, then One X, and finally the modular One R. Now it's releasing an updated One X2, keeping the simplicity of the form factor, but adding many of the cool and powerful features of the One R, and sticking to the same price range at $430.

The One X2 is a one-piece cam, like its predecessor, but with four significant hardware improvements that trickled down from the One R: The improvements don't stop at the hardware level. With the X2, Insta360 is implementing plenty of features I've always wanted from its 360 cams, starting with four different capture modes:

On top of these, the camera still offers plenty of enhancements for image quality (PureShot for better HDR, Night Shot, AquaVision for underwater snaps) and capture frequency or style (burst, timelapse, hyperlapse, interval). Four mics allow it to record ambisonic immersive audio, or stereo audio with wind reduction. Like the One R, it also offers voice controls, and can be paired with AirPods (or in my experience any Bluetooth buds) for better sound recording if you plan to walk away from the cam or shoot in noisy environments. 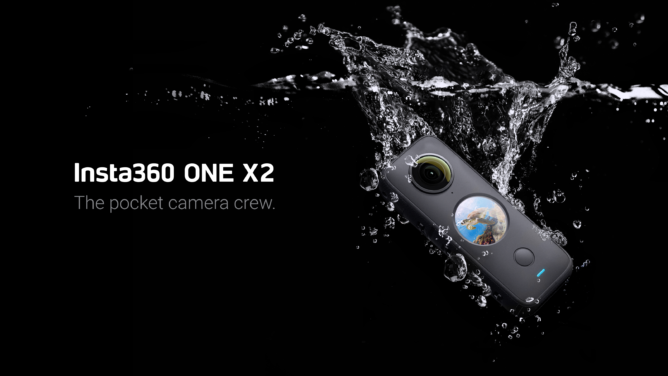 The One X2 will also benefit from Insta360's app, which is one of the most exhaustive, but also most infuriating image/video editing experiences on Android. The company's apps have always been clunky and buggy, but boy do they have enough features to make your head spin! My favorite, the Shot Lab, which I had a lot of fun with on the One R, lets you transform simple videos into cinematic effects like the Dolly Zoom and Clone Trail with a tap of a button. It can even take a 360 timelapse, remove people from it, and get you an unobstructed photo.

And when you're done using the One X2 outdoor for all your fun and silly adventures, you can take it indoor and connect to your computer as a webcam for Zoom and other video conferencing services. This isn't a necessary feature, but it's a welcome addition for those who don't want to buy a standalone webcam.

In the box, you'll get the One X2, protective pouch, USB-C charging cable, and lens cleaning cloth. As always, Insta360 will sell several more accessories for the cam, including extra batteries and a charging hub, a microphone adapter, and a plastic lens guard. The One X2 ticks nearly every item on my ultimate 360 cam wishlist — the only thing missing is 8K capture to allow for high-res videos when using the single-lens mode, and thus replace standalone action cams. But I understand that processing 8K video requires a lot of resources, and that would make the whole experience less than ideal on mobile. Besides that, I love everything about the One X2 on paper. It provides the simplicity of the One X's hardware design and the extra features of the One R, a mix I've wanted ever since I started using the latter. I should be getting a review unit soon, and I'll let you know if its lives up to its potential in reality.